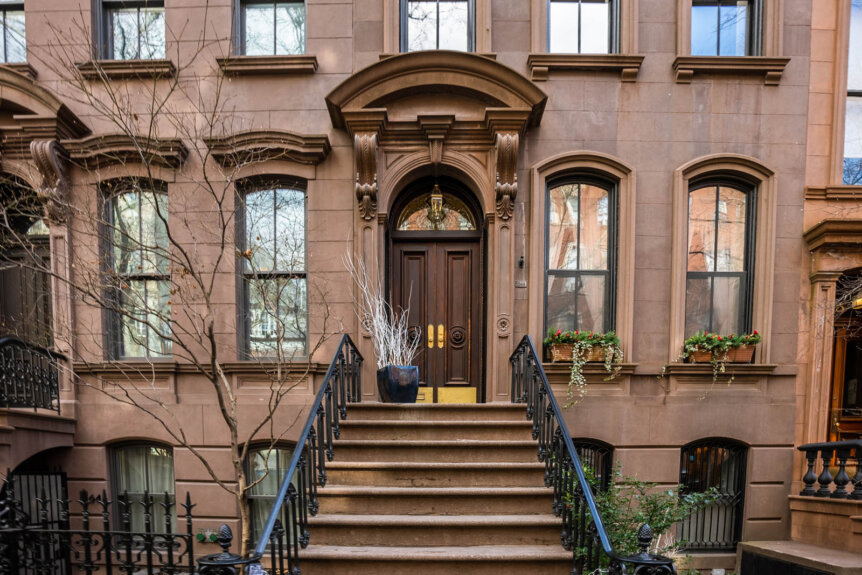 Fans of the groundbreaking series Sex and the City know that it’s possible to love something rough around the edges that always found a way to romanticize life in NYC. Kind of like Carrie and Big, it’s a great love that’s also toxic at times! So, when the reboot, And Just Like That… came out, I knew we were all in for some classic SATC tropes in classic New York City settings.

Nostalgia is the name of the game when it comes to AJLT. We even see Carrie’s old apartment at 66 Perry Street in Greenwich Village, one of the most iconic filming locations in NYC sought out after by long time SATC fans.

However, New York just isn’t what it used to be in 2004 when the series ended. Coffee Shop, where Carrie, Samantha, Miranda, and Charlotte regularly met for meals, closed in 2018. But don’t worry! We still get to see some of the best locations in NYC!

If you get the chance, I recommend taking a walk and looking for a few And Just Like That… locations around the city. I’ve put together a stop from each episode below. Note that this isn’t an exhaustive list. Also, there may be spoilers! So, keep reading for a list of my favorite And Just Like That… filming locations in NYC!

A post shared by Whitney Museum of American Art (@whitneymuseum)

In Episode 1, “Hello It’s Me,” Carrie, Miranda, and Charlotte have lunch at a bustling restaurant called Clee. However, “Clee” is actually The Whitney Café, found on the street level of the Whitney Museum of American Art in the Meatpacking District.

While the girls are enjoying a full-service dining experience, The Whitney Café is actually a quick-bite café. You can pick up sandwiches, salads, or pre-packaged snacks while you enjoy airy, modern interior design with both indoor and outdoor seating. They also have a variety of beverages on the menu, including coffee, wine, and kombucha.

A lot of And Just Like That… filming locations in NYC are restaurants that you can visit. However, there are also other wonderful stops like my next one. In Episode 2, “Little Black Dress,” Carrie begins her search for a funeral venue that Big would approve of. She finds the perfect, super minimalist location, where we see a lot of classic SATC characters!

In reality, it’s the Greene Naftali Gallery. This contemporary art gallery in Chelsea would have been just Big’s style, with its stark white interiors and no flowers in sight!

You can check out the gallery’s latest exhibits Tuesday through Saturday from 10 AM to 6 PM.

The Graffiti Wall in SoHo

Crosby St, between Spring and Prince

One of my favorite And Just Like That… locations was in Episode 3, “When in Rome…” After the drama of reading Big’s will, Carrie heads to Natasha’s SoHo office, where Natasha evades her.

In the scene, Miranda and Charlotte help Carrie recover from the moment in front of a stunning graffiti wall on Crosby Street.

You can tell that whoever picked this location to film loved it as much as I do! We get the world tour of the wall, with multiple angles. The girls walk out of the frame, leaving us with a full view of the gritty, colorful, sticker-covered wall. Go find it and you’ll see that it’s a great place to take some awesome Instagram photos.

After a long walk across Manhattan in Episode 3, Carrie meets Miranda on the university steps at Columbia. You can find a lot of videos and pictures of this scene being filmed. Like a lot of And Just Like That… filming locations in NYC, things don’t shut down for filming!

The steps are actually those leading up to Grant’s Tomb at Riverside Park in Central Harlem. You can visit the tomb, where the 18th President of the United States and his wife were laid to rest.

Museum of the City of New York

A post shared by Landmarks of New York (@landmarksofny)

In Episode 4, “Some of My Best Friends,” Charlotte meets Lisa Todd Wexley (or LTW, as she’s called by her friends) at her daughters’ school. you may recognize the school because it’s really the City Museum of New York!

A lot of And Just Like That… locations are popular with film companies. Among other TV shows and movies, fans of Gossip Girl will recognize this beautiful building. It’s also used as the exterior of Constant Billiards-St. Jude’s Private Schools in the popular teen drama.

You can see Carrie eating at Sant Ambroeus in Episode 4, and later in the season. This lovely Italian restaurant looks gorgeous in the background with a retro feel.

Also, Carrie visits both the Upper East Side location and the Soho location! Both And Just Like That… filming locations in NYC are used as separate restaurants in separate scenes.

The UES location is on 1000 Madison Avenue. It’s in the scene where Carrie, Miranda, and Charlotte have brunch. They discuss Carrie’s plans to sell her and Big’s apartment.

The SoHo location, at 265 Lafayette Street, is where Carrie meets her realtor-turned-friend, Seema Patel, for cocktails. Here it starts to feel like Seema is the new Samantha!

You’ll find that a few And Just Like That… filming locations can be found in Brooklyn! However, there weren’t many on-site locations in Episode 5, “Painfully Hip.” Most of the action was in Carrie’s kitchen… But Freehold is a great stop on the list.

Here, Charlotte, Miranda, Carrie, and Anthony have brunch after Carrie learns she needs hip surgery. It doesn’t seem reasonable for the crew to go out of the way to Brooklyn for a meal! However, the cool, eclectic vibe of this gastropub and café feels like somewhere they would frequent.

There are a few different restaurant scenes in Episode 6, “Diwali,” but Le Crocodile was the one that stood out to me. Here you see another Brooklyn film site, where Nya and her husband Andre meet up with another couple for dinner. In real life, Le Crocodile is inside Williamsburg’s Wythe Hotel.

In the show, you see it at night, where the lighting gives a stunning ambiance to the original brick walls and wooden floors leftover from its days as a barrel factory. However, the French restaurant gives a nice show any time of day with mosaic tile, tall ceilings, and lux chandeliers.

In Episode 7, “Sex and the Widow,” Miranda runs into Nya and Andre at a farmers market near her house. On the phone, you can hear Miranda telling Steve which vegetable stand he can find her at: “I’m at the good place, the farthest from our house!”

If you want to visit this AJTL film location, you can on Sundays from March through May! In the show Miranda seems to live in Park Slope, so she was probably supposed to be near there. But the greenmarket where she’s at is actually on the northwest side of McGlorick Park in Greenpoint, Brooklyn!

I just had to include this gorgeous bistro in my list of And Just Like That… filming locations in NYC! In Episode 7, Carrie, Miranda, Charlotte, and now Seema all have dinner at Quality Bistro, and the restaurant almost steals the show.

At this brasserie, enjoy a cocktail while you sit in wicker-backed chairs at zinc tabletops. The stunning grey-blue color you see all over in the scene is the trademark of Quality Bistro. That, combined with found brass objects and majestic planter centerpieces make for a relaxed but elevated dining experience.

With so many And Just Like That… locations just in Episode 7, it’s no wonder they didn’t all fit on this list! Also in Episode 7, Au Cheval in Tribeca is breathtaking and it was nice to see it displayed so beautifully on AJLT!

This is where Carrie has her first date with a math teacher from Rose and Lily’s school. The ending of the scene in front of the restaurant is pretty awkward, but the actual restaurant makes a big impact! Here you can enjoy elevated takes on American classics and excellent drinks in a setting that’s a mix of industrial and vintage interior design.

Enjoy the full tour of Foley Square in Episode 8, “Bewitched, Bothered, and Bewildered.” It’s the location of the pride rally where Miranda watches Che perform. While I didn’t recognize the location right away, you can see the pillars of the New York County Supreme Court in the background!

Miranda gets Joe’s iced coffee for her and Che nearby when she’s hiding from her son. While the only actual coffee shop nearby is Starbucks, you could grab a cup and head to the park.

Episode 8 is when Miranda’s storyline gets really intense. Heavy conversations are had at one of my favorite And Just Like That… filming locations in NYC, Chelsea Market.

It’s hilarious to hear Charlotte carry on a conversation about her relationship with Harry in the middle of Lobster Place! This is also where Miranda breaks the news to the girls that she’s going to ask Steve for a divorce. By the way, if you get the chance, try their Maine Lobster Roll.

When it comes to And Just Like That… locations, it was fun how they worked in the Chelsea Market bakery, Fat Witch. Carrie buys cookies for her downstairs neighbor and suggests Miranda buys some goodies to soften the blow when she talks to Steve. The whole time, Carrie’s cracking jokes about the bakery, and it really works!

I immediately recognized the Empire Diner in Episode 9, “No Strings Attached.” When it comes to And Just Like That… locations, it was nice to see such a happy moment between Che and Miranda at such a relaxing, casual spot, at one of our favorite diners in NYC.

The hip, old-school diner under the High Line definitely feels like somewhere they would eat! You’ll love the light wood, subway tiles. retro light fixtures, and a great view of 10th Avenue in Chelsea. Sit in the end booth just like Che and Miranda and take a picture!

Her Name Was Carmen

You won’t see one restaurant on my list of And Just Like That… filming locations in NYC. The spot where you see the girls eating at the beginning of the finale? It was actually an event space designed to look like a restaurant. It was a set!

However, in the 10th and final episode, “Seeing the Light,” Her Name Was Carmen really stood out. This is where Miranda goes to meet Che’s family. Che ends up surprising everyone and performs “California Girls” to announce her move to California!

The restaurant and bar has a great feel, focusing on Latin American culture rather than a particular country of origin. Come here for Latin takes on seafood, vegetarian, and vegan cuisine on another level.

With more seasons on the way, there are many more And Just Like That filming locations in NYC to look forward to!