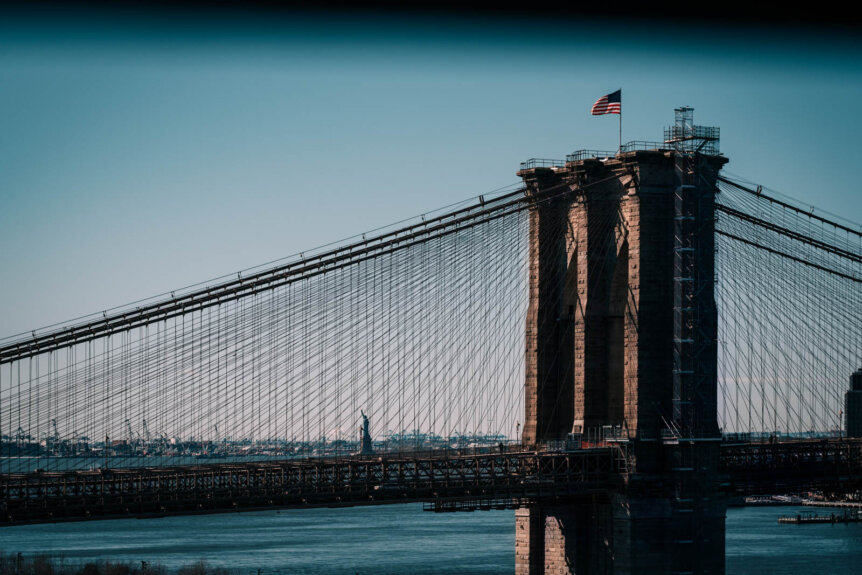 The history of the Brooklyn Bridge, engineering a love story. Imagine New York City’s Gilded Age on May 24th, 1883. Celebrations are taking place simultaneously in Brooklyn and Manhattan. Amidst lavish pageantry and blasts of fireworks thunderously defying the evening sky, two of the world’s most prominent cities have become one.

The focus of all this fanfare? John Augustus Roebling’s masterful engineering feat, the Brooklyn Bridge. And at the heart of this iconic bridge, an understated love story.

You might ask why the jubilance? For one thing, the bridge itself should have been impossible. It is an engineering marvel. It measures 5,989 feet in length (just shy of a mile), 85 feet in width, and a 276.5-foot height above the water, allowing easy passage for merchant ships.

Of greater importance, the bridge promised the immediate transformation of millions of lives. Brooklyn had a massive resource that Manhattan’s mounting industrialization required: workers. And the bridge delivered on that promise.

The two cities’ union would not be formalized, however, for another 18 years, on January 1st, 1898. Ratifying the 1894 proposal to incorporate Staten Island, Queens, the Bronx, Brooklyn, and Manhattan into New York City. Life leaps ahead, whereas bureaucracy crawls behind. (The Brooklyn Bridge: A World Wonder) 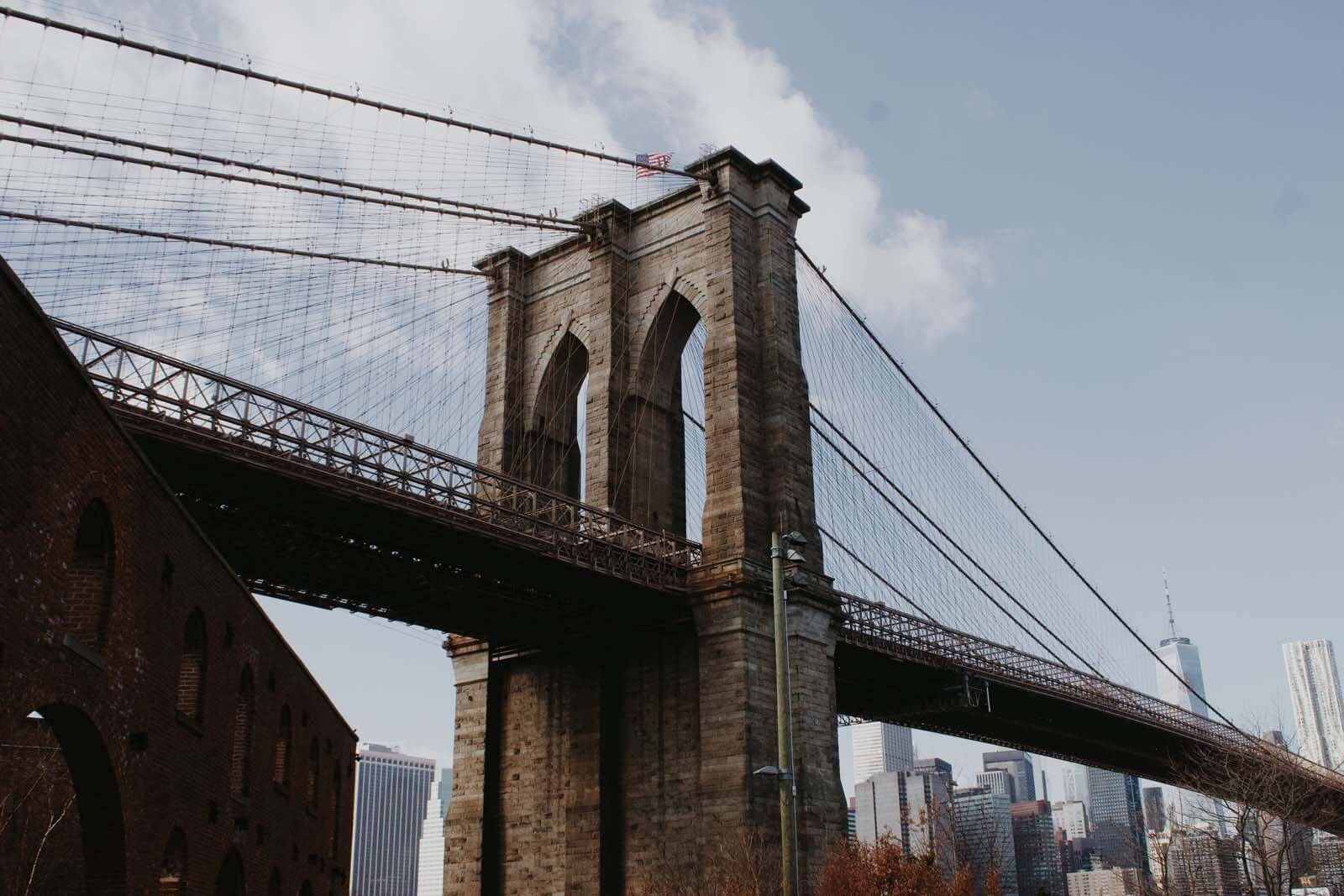 Here are a few quick facts about the history of the Brooklyn Bridge:

Before the bridge existed, people relied on ferries to carry them over the notoriously turbulent narrows.

Crowds of men and women attired in usual costumes, how curious you are to me!

On the ferry-boats the hundreds and hundreds that cross, returning home, are more curious to me than you suppose.

And you that shall cross from shore to shore years hence are more to me, and more in my meditations, than you might suppose.

Moreover, nature imposed her own hindrances. In the winter of 1867, the East River froze. This was the sixth time in a little over 50 years. Ships became stuck, which meant no ferries and no work. Many determined individuals skated the frozen river to Manhattan and back.

Disruptions like this, coupled with a series of devastating cholera outbreaks (due to housing deficits and inadequate sanitation), forced civic leaders to recognize the urgent need for infrastructural improvements.

One phase of the overarching plan was the construction of permanent bridges between Manhattan and Long Island. So, a meeting took place between New York State Senator Henry C. Murphy and William “Boss” Tweed. As soon as Tweed received Murphy’s carpetbag of $65,000, John Roebling’s dream project finally gained traction. (Jesse Greenspan, 10 Things You May Not Know About the Brooklyn Bridge)

John A. Roebling (1806-1869) was a Prussian engineer who had studied mathematics, engineering, and architecture in Berlin. He had built bridges over both the Niagara Gorge and Ohio River.

His biographer, Richard Haw, observed: “He combined advanced mathematics and physics with the eye of [an] artist and a master craftsman to produce sublime artifacts of the industrial age, great icons of the nineteenth century.” (Richard Haw, Spiritualism and Suspension Bridges) Roebling is recognized for the innovation of using braided steel for the Brooklyn Bridge’s suspension cables.

Also drawn to spiritualism (a fusion of science and mysticism), then in vogue, Roebling believed in the Odic Force and seven spheres of existence. Visionaries, like Roebling, temper scientific facts upon their yearning to discover what is possible, even to this day.

However, the great man would not live to see his masterpiece which would also change the path of history of the Brooklyn Bridge forever. While Roebling surveyed a worksite, merely commencing his massive construction project, a docking ferry caught and crushed his foot. After the amputation of several toes, he refused further medical treatment, favoring spiritualism instead.

Pouring water continuously over the wound, a method known as “water treatment,” Roebling sought to heal himself by sheer will. He died of tetanus 24 days later. Thus, Washington Roebling (John Roebling’s son), an accomplished engineer in his own right and instrumental in this project from its inception, was awarded the project.

Upon taking on the project, one of his father’s first decisions had been to send Washington and his wife, Emily, to Europe. This would be no honeymoon for the newlyweds.

This tour would be a crash course in the latest innovations in wire mills, bridges, and most importantly, caissons—the temporary, air-tight structures that would allow work crews to operate deep beneath the river, establishing the towers’ foundations.

These workers, known as “sandhogs,” were to excavate the mud and silt and emplace massive granite slabs. On returning from Europe, Washington designed, constructed, and oversaw the operation of two pneumatic caissons.

Only a few months later, he would find himself both mourning the untimely death of his father and replacing him as chief engineer. In this position, he made several significant improvements to the bridge’s design and advanced bridge-building techniques.

A year after Washington’s ascension to chief engineer, a disaster occurred. A fire swept through one of the caissons. Washington helped extinguish the flames and rescue his crew. However, he contracted a condition then known as “caissons disease.”

This condition is caused by ascending too fast from a high-pressure environment to a low-pressure environment, releasing nitrogen concentrations formed in the bloodstream during the initial descent. Now known as decompression sickness (a.k.a. “the bends”), this was Washington’s second bout with the illness, partially paralyzing him and effectively bedridden.

Investors panicked. Someone else equally educated in engineering and on the project itself needed to step in. Otherwise, the whole affair was doomed. As fortune had it, Washington’s wife, Emily Warren Roebling, fit the bill. Well-educated and an autodidact, Emily understood engineering and bridge-building.

Ever supportive and engaged with everything her husband did, she volunteered to act as a liaison. However, as construction progressed, Emily practically took over all her husband’s duties, except in title.

Not that she cared much about that. In fact, in 1882, the investors wobbled over whether Washington could or should continue managing the project.

Emily went before the commissioning board, argued for Washington, and won. Emily’s authority and presence were keenly felt by the workers, investors, politicians that she interacted with daily. So much so that Emily earned renown as the first female field engineer.

She is also known as the “woman who saved the Brooklyn Bridge.” This husband-and-wife team pulled off one of the most extensive and complex feats of engineering in history; neither could have done this without the other. Therefore, the story of the Brooklyn Bridge is one of both genius and love.

The fascinating history of the Brooklyn Bridge has since inspired many writers’ works, like those of Jack Kerouac, Vladimir Mayakovski, Marianne Moore, and Hart Crane. The opening stanza to Crane’s poem To Brooklyn Bridge is loaded with dynamic energy:

Again the traffic lights that skim thy swift

And we have seen night lifted in thine arms.

Walt Whitman too, who first saw the bridge in its near completion in 1878, prophesied that it would create a “city of superb democracy, amid superb surroundings.”

To this day, each spring, scores of poetry lovers join for what is called the Bridge Walk. When they reach Fulton Ferry Landing, they listen to a full-length reading of Whitman’s Crossing Brooklyn Ferry. (Poets.org: The Brooklyn Bridge) 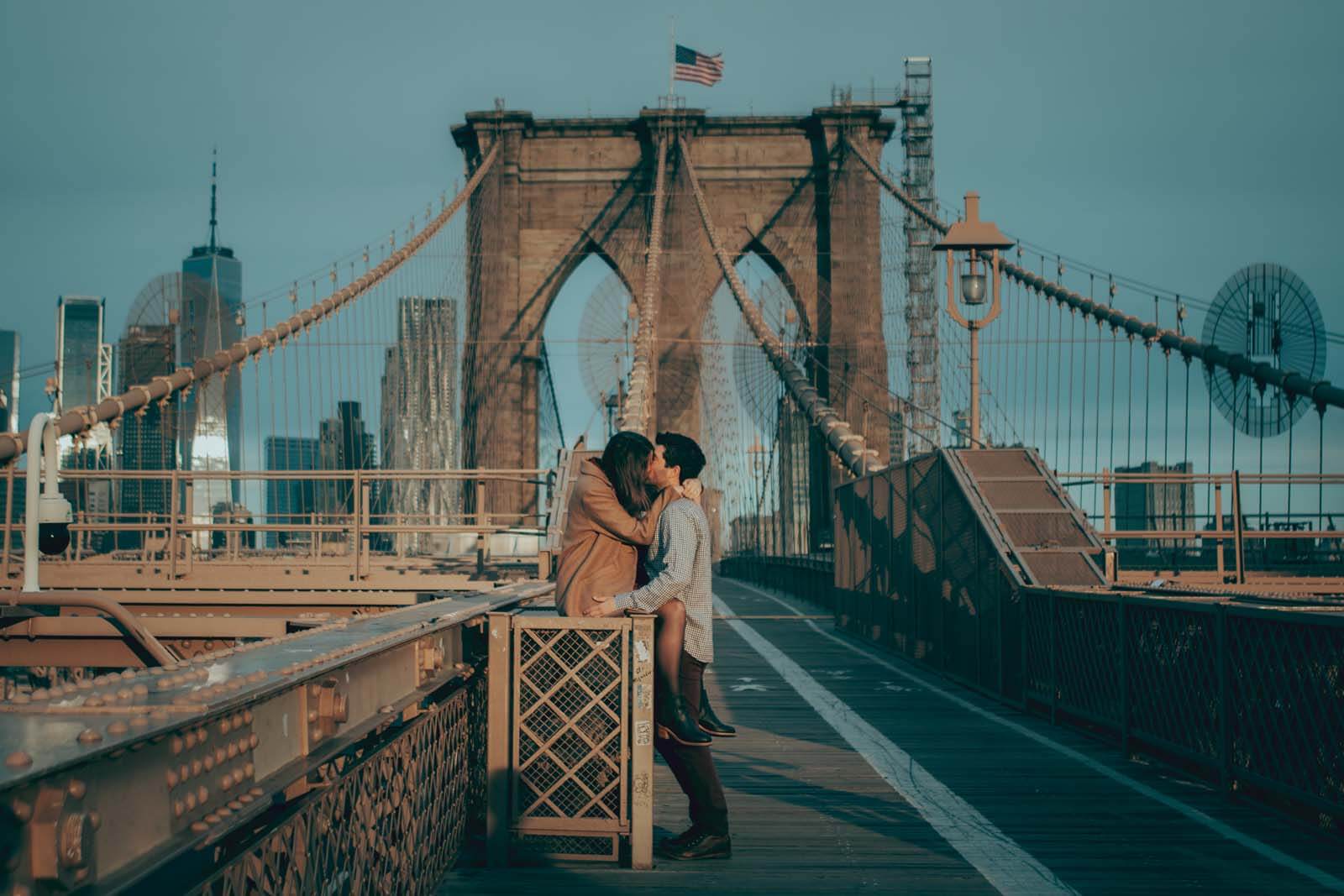 These days, aside from the daily commuters, one of three types of people pay their respects to the history of the Brooklyn Bridge:

This companion guide was either a tourist or pilgrim once too. This individual has seen the bridge from both perspectives. He or she has admired its Insta-ready soaring, open-faced architectural design and the hundreds of lovelocks that encrust its surface.

Yet, has also walked its 5,989-foot length, to the end and back, often as the sun lowers beyond Manhattan’s skyline.

For more by this author check out the articles below: