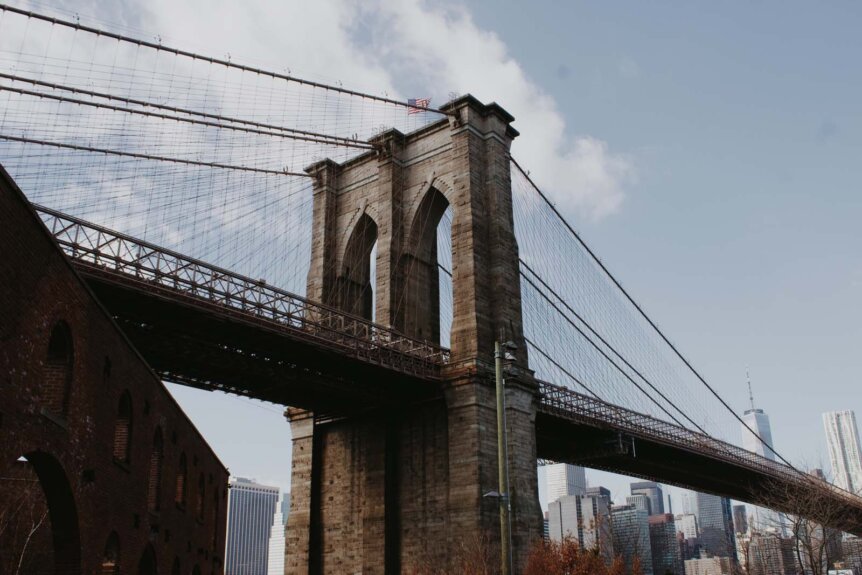 Besides being beautiful and one of the most photogenic locations in the city, a popular filming location, and most visited tourist attractions, this architectural wonder of the world also has a very interesting backstory and a few fun facts about the Brooklyn Bridge.

Not to mention, the Brooklyn Bridge is also one of the best spots for views of the New York skyline from Brooklyn. 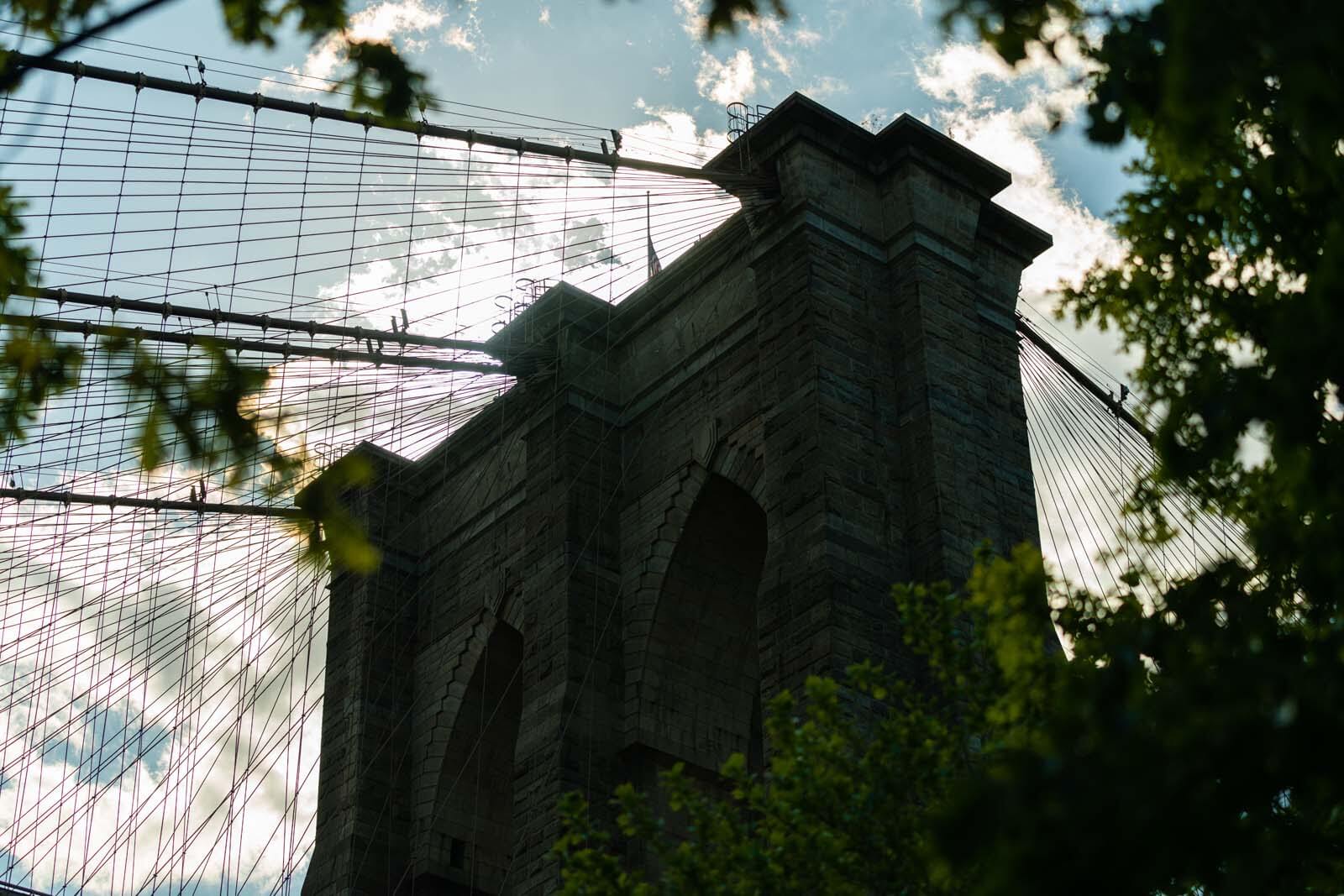 Flood-tide below me! I see you face to face!

Clouds of the west—sun there half an hour high—I see you also face to face.

Crowds of men and women attired in the usual costumes, how curious you are to me!

On the ferry-boats the hundreds and hundreds that cross, returning home, are more curious to me than you suppose,

And you that shall cross from shore to shore years hence are more to me, and more in my meditations, than you might suppose. – Crossing Brooklyn Ferry, Walt Whitman

Before the bridge that has become an American icon was built, Whitman’s description of crossing the East River by ferry was the reality for hundreds of thousands of New Yorkers, visitors, and new Americans every year. This also was one of Walt Whitman’s favorite Brooklyn spots to people watch.

While the Neo-Gothic arches and beautiful cable lines which serve as a major artery connecting Brooklyn and Manhattan have become commonplace to those who cross every day, the history of the Brooklyn Bridge is more compelling than one would expect.

What we today know as the Brooklyn Bridge, was once no more than an idea of the famed German immigrant, architect, and engineer John Augustus Roebling. Having developed his own method of winding wire cables, Mr. Roebling gained worldwide renowned as he built a number of famous bridges including the Cincinnati-Covington Bridge (also known as the John A. Roebling Suspension Bridge) in Ohio, the Waco Suspension Bridge in Texas, and the Roebling’s Delaware Aqueduct in Pennsylvania.

While the idea of connecting Manhattan and Brooklyn had been around for decades (some had even considered a “Flying Pendant Lever Bridge”) the large amount of boat traffic, and tidal forces that affect the East River made conventional bridge-building challenging if not impossible.

Wood and iron all posed their own sets of problems, but with Mr. Roebling’s suspension cables, the great bridge finally became a possibility.

In 1869, while taking measurements and surveying the location at the end of a dock, Mr. Roebling’s foot became pinned by an arriving ferry.

The injury resulted in an emergency amputation of his toes. Refusing treatments beyond “water therapy”, Mr. Roebling succumbed to tetanus infection, and died only 24 days after the accident, without ever seeing his greatest creation completed and shaping and transforming the Brooklyn Bridge story and history forever.

While the Brooklyn Bridge story could have ended before it had truly begun, Mr. Roebling’s partner and son, Washington Roebling, was named chief engineer of the bridge.

Bringing fantastic new innovation to the project, Washington improved and developed upon his fathers’ plans. One such improvement was the design of pneumatic caissons, large air-tight spaces which can be pumped free of water, allowing the workers a dry environment to work in, even 10 meters deep.

Since the water was pumped out with compressed air, the pressure the laborer’s worked under could be immense.

The workers in these caissons would have to undergo decompression to ensure they were not afflicted with decompression sickness, or the Bends, after working at such depths.

In 1872, the bridge took its toll on the younger Roebling after Washington came down with the Bends, preventing him from leaving his bed for the remainder of the construction.

After her husband became ill, a third Roebling again picked up the enormous project. Emily Warren Roebling initially worked running messages and instructions from her bedridden husband in his Brooklyn Heights apartment, but eventually took a much more hands on role.

Emily took charge of the projects design, construction, workers and more. A pioneer for women in engineering, Emily Warren Roebling is celebrated today as one of the first female engineers and feminist models of her time.

In all, the planning and construction of this fantastic structure took 16 years, over 1000 tons of steel, 15 million dollars (almost $320 million today), and cost the lives of at least 27 workers, many of whom were Irish immigrants.

At the time, the completed project was hailed as the longest suspension bridge, and was billed as the “Eighth Wonder of the World.”

So, the next time you drive, bike, or walk the Brooklyn Bridge under the beautiful arches, consider the perseverance and ingenuity required to raise a gothic cathedral from the depths of the East River.

Also, be sure to read this piece if you want to dive deeper into the history of the Brooklyn Bridge.

Facts About the Brooklyn Bridge 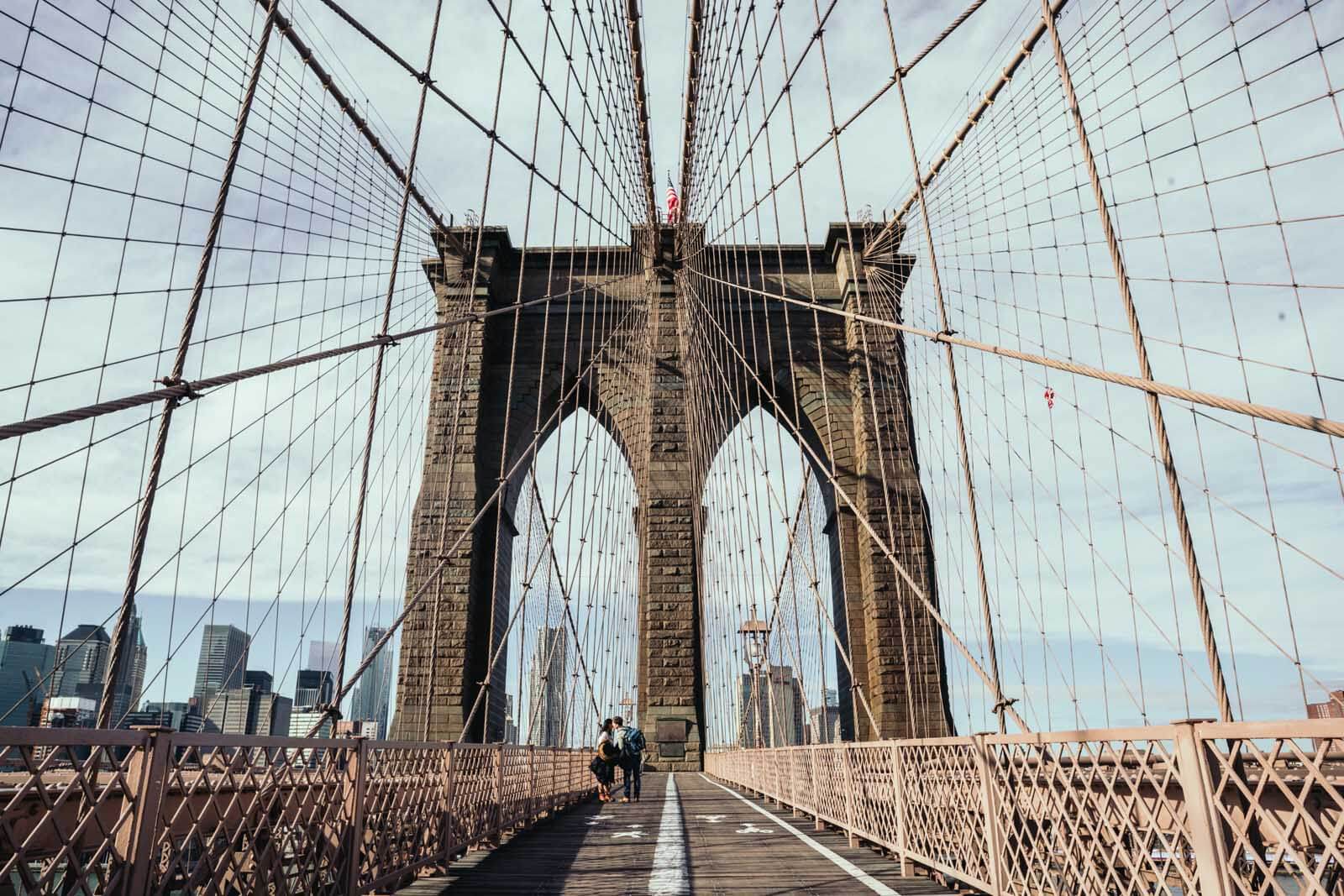 The Brooklyn Bridge story and one of the most facts about the Brooklyn Bridge is as complex and layered as the cities it connects. For example, notorious kingpin, William “Boss” Tweed was instrumental in encouraging city council members to ensure funding for the bridge. It’s estimated over $65,000 in bribes were given to sway the council’s votes in favor of the bridge construction.

High-pressure air chambers 30 feet below water, loose cable strands, scaling extraordinary heights, and moving tons of granite 277 feet into the air were all feats completed by the builders of the Brooklyn Bridge, all in a time before OSHA or conventional labor laws.

Over the 13 years of construction, it’s estimated 27 men fell, were crushed, or died from decompression sickness. No history is without suffering and loss, and the story of the Brooklyn Bridge is no different.

3. First Rooster to Cross the Bridge

Bands, fireworks, and President Chester A. Arthur all helped to set a stage for celebration. The honor of the first official crossing of the Brooklyn Bridge fell to Mrs. Emily Warren Roebling – wife of the bedridden chief engineer.

One week before the official opening, Mrs. Roebling crossed the bridge in a carriage, while carrying a rooster – a symbol of victory and good fortune.

4. First of its Kind has a Toll

The next Brooklyn Bridge fact has a bit of a dark side. One week after the official opening, the bridge was packed with people enjoying the beautiful weather and admiring the incredible views from the bridge.

The story goes that a woman had tripped – or gotten a heel stuck the grating – causing another woman to scream. In an instant, the blissful day turned into one of sheer chaos, with people screaming the bridge was about to collapse.

Complete and utter hysteria encapsulated the bridge, and a massive stampede erupted, with people dashing in both directions to get off the bridge. In all, 12 people were killed and more than 30 injured.

After the awful stampede, newspapers went wild with claims against the bridge’s safety, and public support of the bridges enormous expense waned.

The fact is the Brooklyn Bridge almost did not survive its first month open to the public.

To help assuage any doubts New Yorkers may have about the bridge, publicists asked P.T. Barnum to bring in a very visible, and very heavy demonstration. In 1884, 21 elephants, as well as 17 camels and dromedaries, walked across the bridge. The famous giant African elephant, Jumbo, led the parade.

An interesting fact about the Brooklyn Bridge is, well that wasn’t always its name. Since its inception and first design, the bridge has been called the New York and Brooklyn Bridge, and the East River Bridge.

It didn’t officially receive the Brooklyn Bridge name until 1915.

If you like learning about the reasoning behind names, check out what does DUMBO mean in Brooklyn too!

Because of its remote location, road grime, and updates to the bridge’s construction, members of the Community Board in the district have petitioned to have the marker moved to a more prominent location, but for now, the previous location of 1 Cherry St remains all but hidden by the Brooklyn Bridge.

The story of the Brooklyn Bridge is full of surprises! This is one of the coolest Brooklyn Bridge facts that most people have no idea about! Did you know there are secret rooms inside the bridge?!

Enormous stone anchorages were erected on both sides of the East River. These huge structures were built to support and secure the bridge’s cables.

Due to the tension of the massive cables, these anchorages are enormous. In the original design of the bridge, there were plans to use the cavernous spaces within these anchorages for retail or restaurant spaces to help offset some of the cost of the Brooklyn Bridge.

While many of the retail plans fell through, from the 1870s until prohibition, two enormous wine cellars operated at either end of the bridge. Space could be purchased for upwards of $5,000 or rented at nearly $500 a year.

Every now and then people notice a door open on the Brooklyn Bridge and can actually see these abandoned spaces and rooms in the bridge.

9. Bunkers in the Bridge

Another Brooklyn Bridge fact about those rooms inside the bridge! What does the Brooklyn Bridge story have to do with the Cold War? Well, in 2006, New York Department of Transportation employees discovered a secret that had been kept since the Cold War.

A bunker with water, medical supplies, food, and more provisions (including almost 300,000 crackers!) were found within the masonry anchorage.

During the Cold War, fear of a nuclear attack from the Soviet Union was on everyone’s mind, and the granite structures must have seemed a fantastic and safe place to wait things out!

Let’s fast forward to today for this fact about the Brooklyn Bridge. According to the New York Department of Transportation, every day over 100,000 vehicles, 4,000 pedestrians, and over 2,000 bicycles cross the Brooklyn Bridge. It’s so interesting to think about everything in the Brooklyn Bridge story from the past that hides just below our feet as we stroll, bike, or pause to take in the sunset over the city.