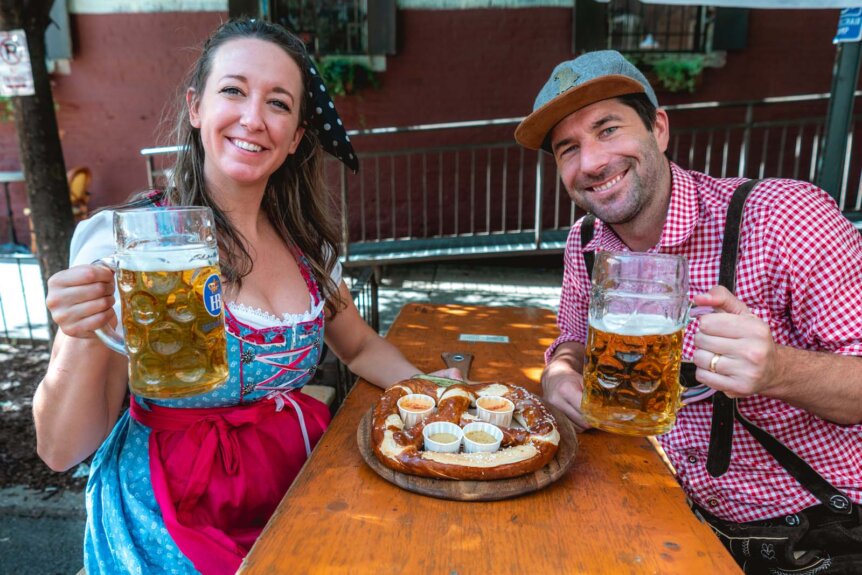 We have put together all our favorite German beer halls in Brooklyn, let us know if we missed one of your favorites, along with what we recommend getting at each one, tasted and test approved by yours truly.

On our German beer garden Brooklyn crawl we hit up every single one of these beer halls in Brooklyn besides the last one, it was too far away to do in one afternoon. Some of these stops are walking distance to one another and others require hopping on a short subway ride (around 20 minutes). 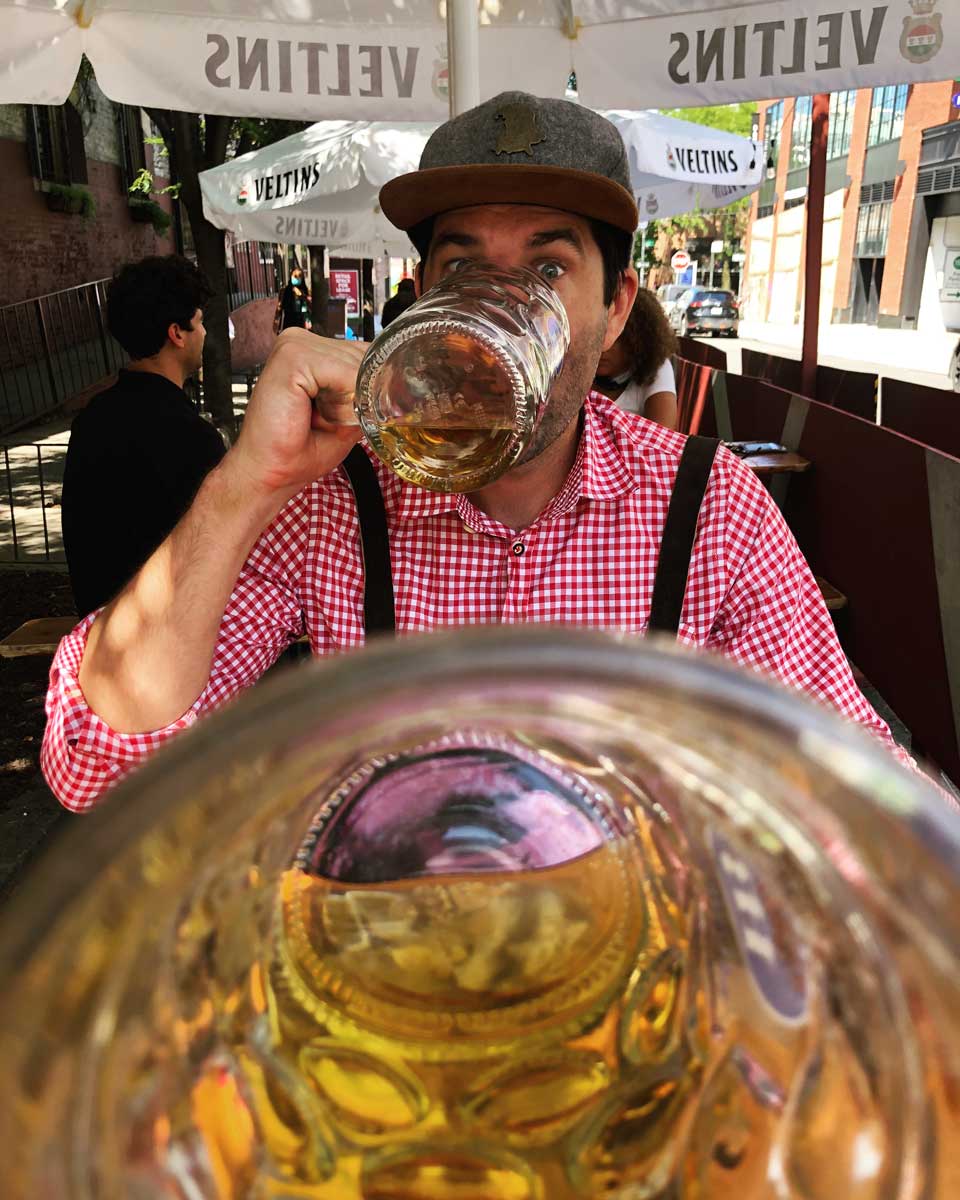 If you plan on hitting up multiple of our German beer gardens in Brooklyn we picked, you will want to do what the Germans do in beer festival season and opt for the lighter brews like pilsners and lagers. Hefeweizens and bocks are a little too heavy to drink copious amounts, especially if you want to make multiple stops like we did.

If you’re only making one or two stops, ignore my advice and just drink any beer you like as you don’t need the endurance.

Now grab your lederhosen and dirndl (if you have them) and get ready for a fun day hunting down all the best German beer halls in Brooklyn to bring German beer festival season to you right here in NYC. Prost! 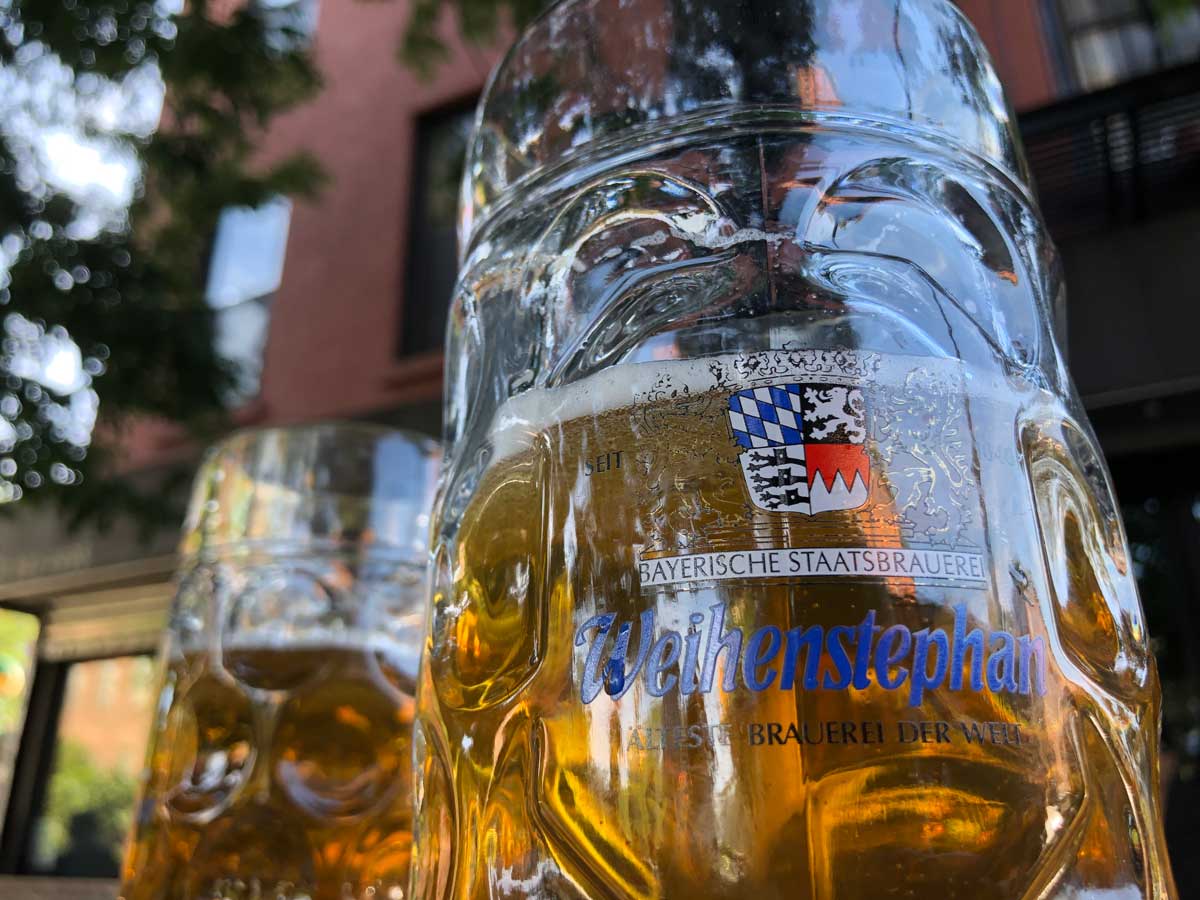 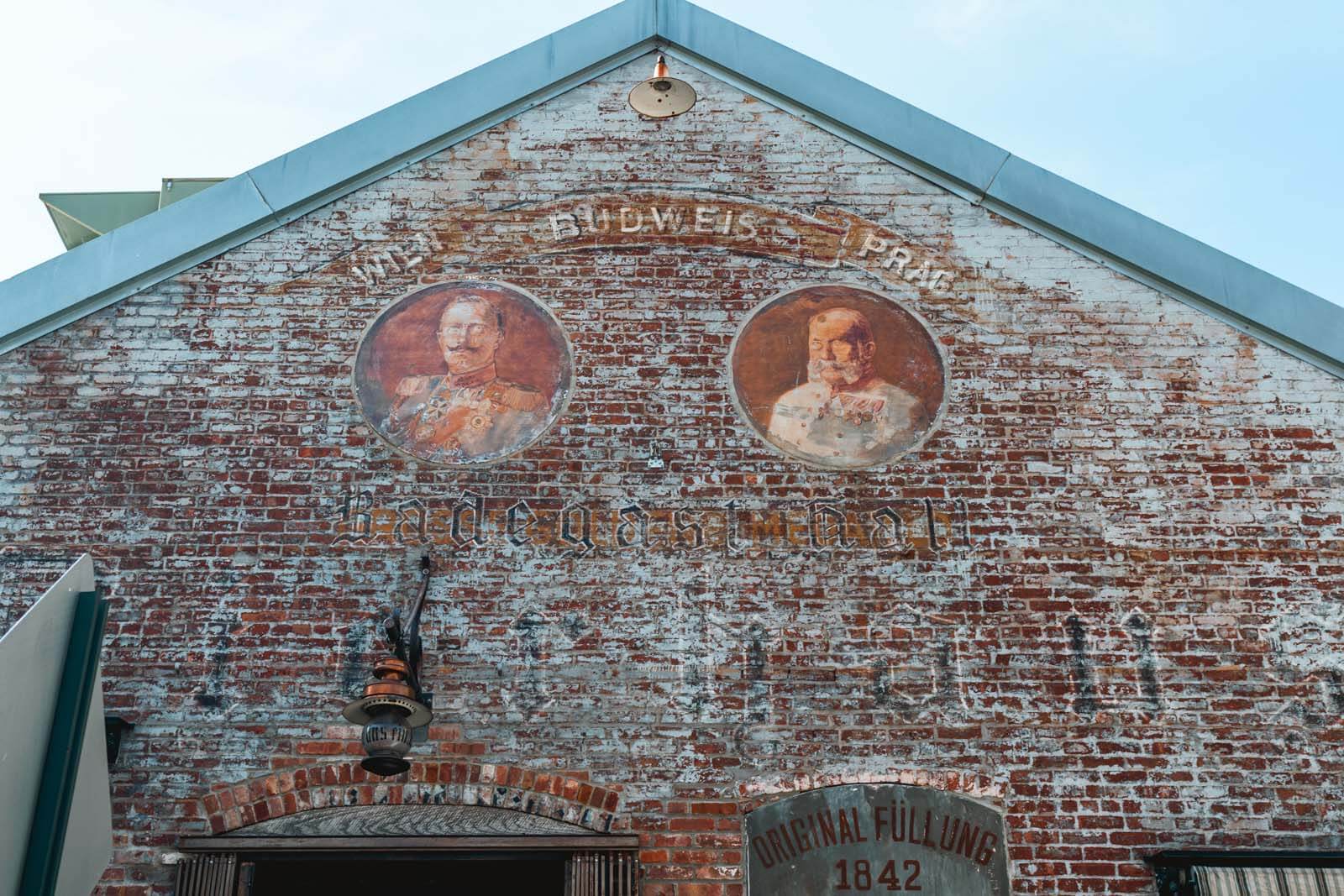 Easily one of our favorite beer gardens in Brooklyn and German Beer halls is Radegast Hall & Biergarten in Williamsburg. This is also one of the most popular and well known of the German beer halls in Brooklyn as well because Williamsburg is where many visitors flock to for the fun nightlife, food, and shopping is in Brooklyn’s most hipster neighborhood.

From someone who has spent a considerable amount of time in Germany, specifically attending beer festivals and traveling extensively through Bavaria, Radegast Hall & Biergarten definitely feels like one of the more authentic German beer halls in Brooklyn with its Old World charm.

Besides serving up giant liters of German beer on draft, you can pair your meal with a variety of German dishes including their famous bratwurst and big Munich pretzel with Bavarian sweet mustard. Many of their dishes are grilled up on the back grill, everything we’ve tried here has been awesome.

Inside this giant German beer hall in Brooklyn, you’ll find long tables and benches, so on busier days you might be buddying up with new friends just like at Oktoberfest. There are three main sections to Radegast Hall & Biergarten, the main hall, the open air beer garden, and the Bier Haus in the back.

Radegast Hall & Biergarten also hosts many events throughout the year including their own Oktoberfest celebrations which include a DJ, brass band, pig roast, ceremonial keg tapping, and mug holding competitions for both men and women every Saturday during Oktoberfest.

Radegast Hall & Biergarten also has private event spaces too if you’re looking for the perfect venue and German beer hall in Brooklyn to host your own event or wedding at!

What to Try: Munich pretzel with sweet Bavarian mustard and get the beer cheese! 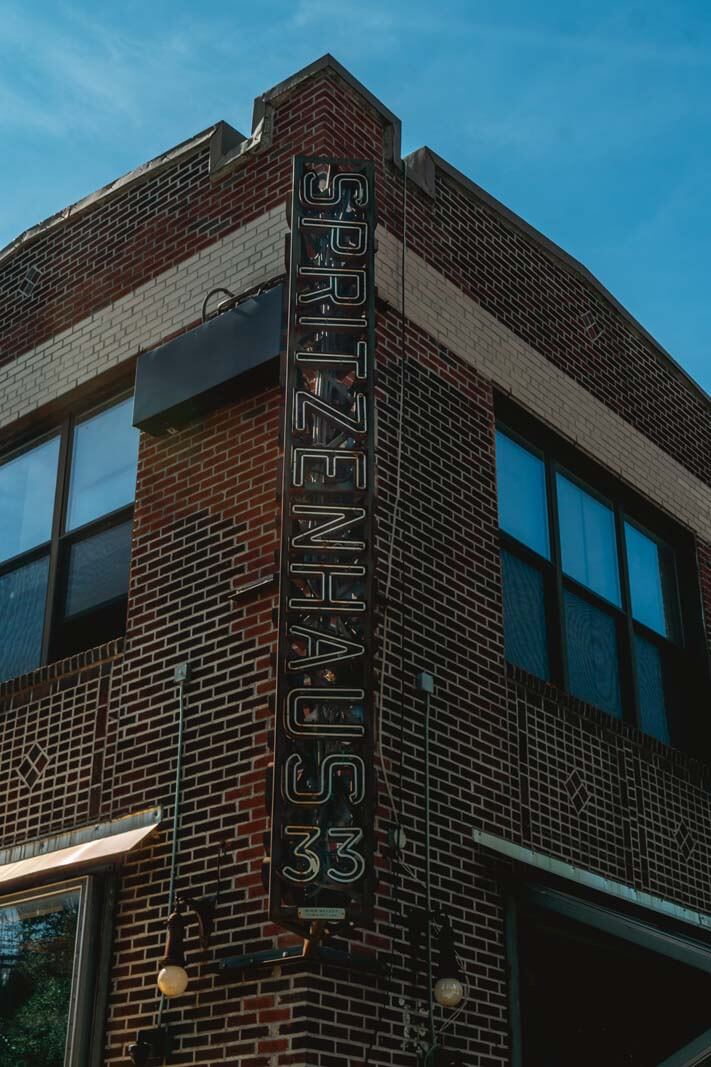 Another great beer garden in Brooklyn to hit up, before or after Radegast Hall & Biergarten is Spritzenhaus 33 in Greenpoint. This is less than a 15-minute walk from Radegast and close to the border between the neighborhoods of Williamsburg and Greenpoint.

This open style German beer garden in Brooklyn serves up tons of draft beers from all over the world, not just Germany and offer a range of other drinks including gluten-free beer for our gluten-sensitive friends, cider, wine, and a full cocktail menu.

Spritzenhaus 33 is known for its German Pilsners on draft, they usually have a few to choose from of their 25 taps and have even more of a selection in bottles and cans.

Pair one of your brews with one of their build your own sausages served on a pretzel bun.

What to Try: We like this stop to try beer, but if you’re feeling hungry try a sausage on a pretzel bun! 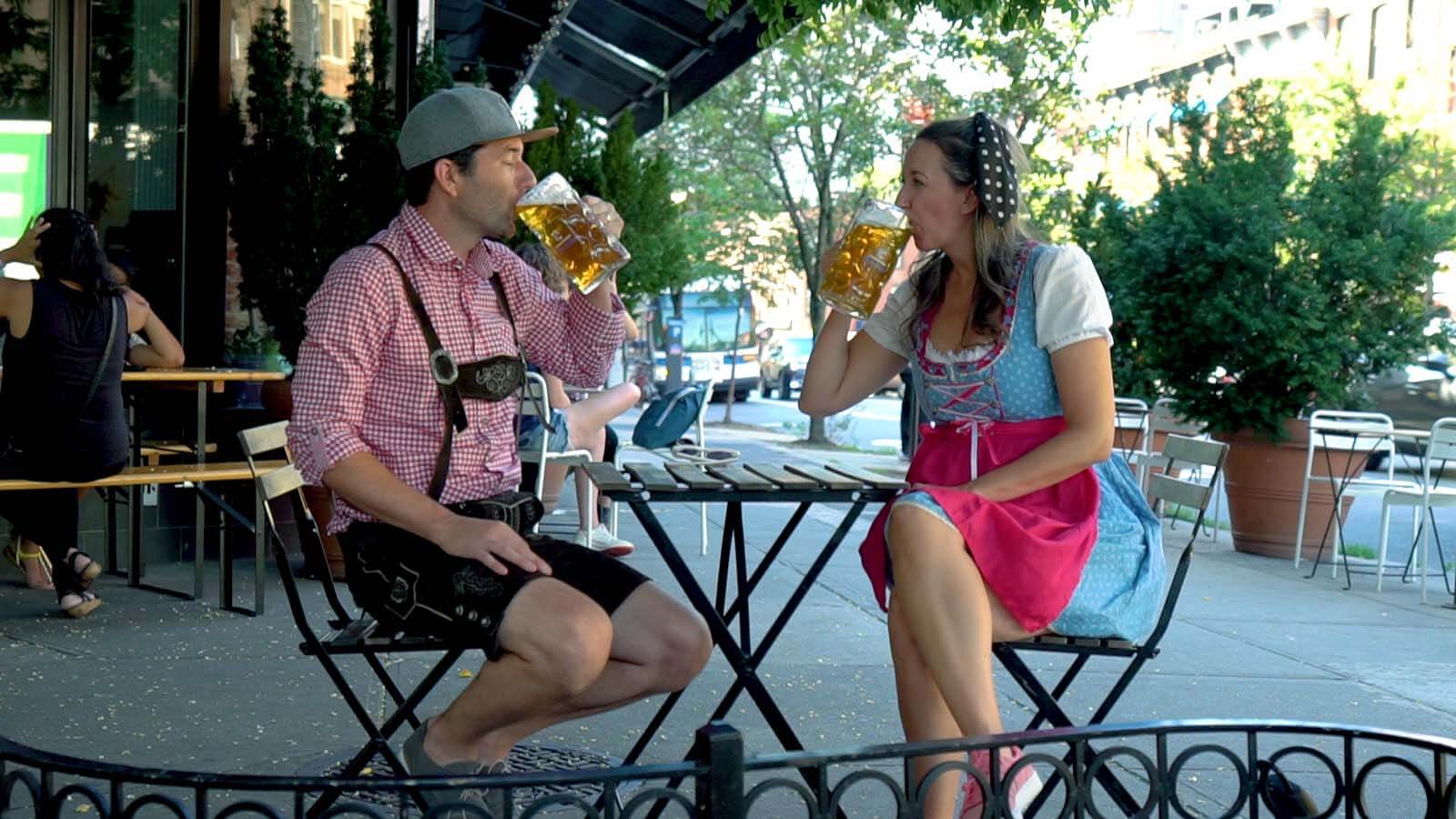 We visited in the summer and enjoyed their outdoor seating, I am not sure if its sitting near the small garden and under the trees or just the location in general, but DSK Brooklyn straight up feels like we were enjoying our beer and bratwurst in the streets of Germany.

DSK Brooklyn Die Stammkneipe is a traditional German beer garden in Brooklyn and feels like it. The indoor space is casual and has long communal tables, just like in Germany.

There are 18 beers on draft including specialty beers, weizens, pilsners, lagers, bocks, and other traditional German and Central European style beers as well as wine and a selection of local craft beers in bottles and cans.

They have a full food menu that also makes it feel like an authentic German beer garden in Brooklyn serving up schnitzel both as a platter or in sandwiches, sausages like currywurst, sausage platters on a bed of sauerkraut, and bratwurst served on a pretzel bun, spaetzle, and even strudel for dessert.

Just do yourself a favor, and visit this beer garden in Brooklyn! Plus, you’re walking distance to another one of our picks for best German beer halls in Brooklyn!

What to Try: Get a liter of German beer paired with one of their bratwursts with sauerkraut and sweet Bavarian mustard on a pretzel bun, yum! 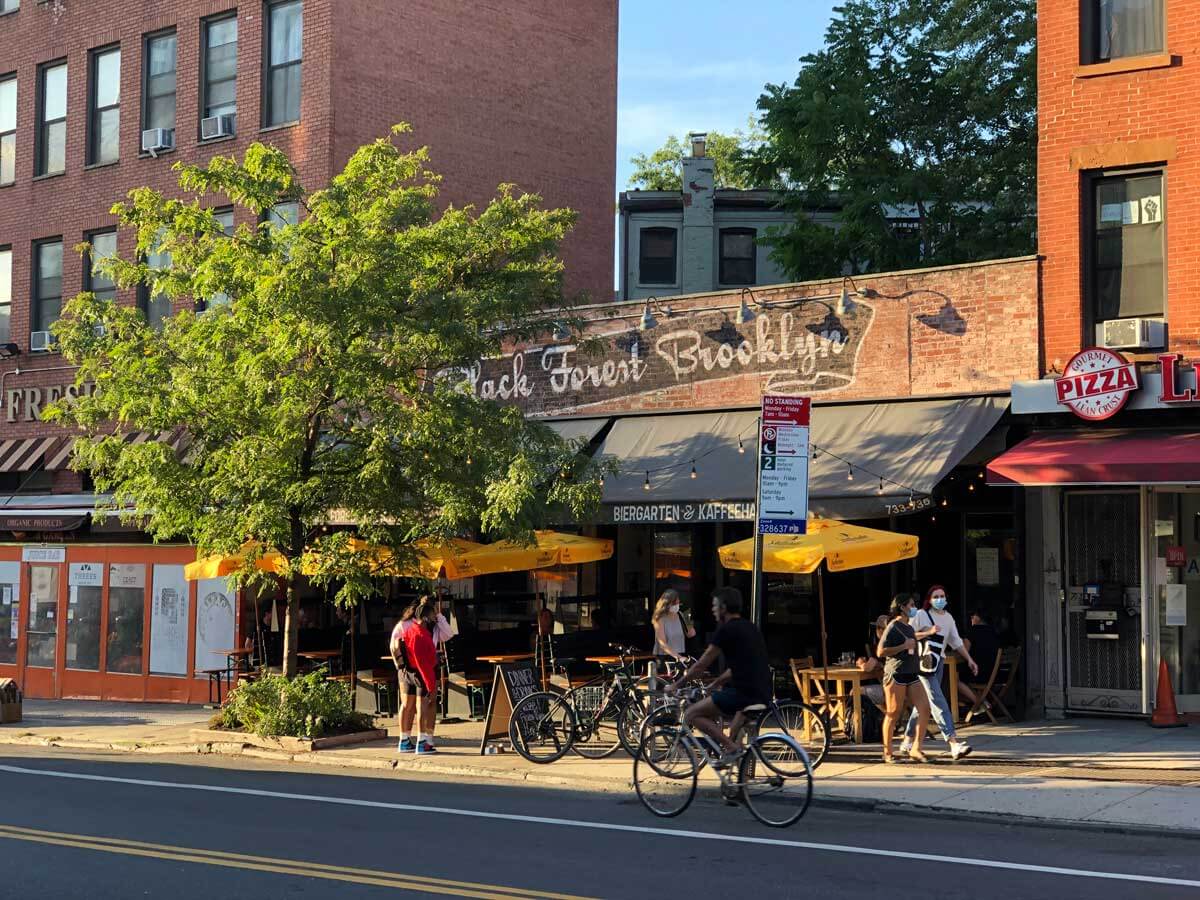 You will find their menu is stacked with great German beers on draft, wines, and craft spirits. They have different styles of German beers to choose from and different sizes. They have the common German liter of beer, or if you’re feeling extra ambitious you can get the Das Boot glass which is a full 2 liters of beer!

At these German beer halls in Brooklyn, you can pair your beer with any of their German dishes from their family-style sharing plates like the Wurstplatte, a few different styles of German sausages with 4 sides or a German Family Feast that feeds 4-6 people with various sausages and sides to choose from.

Their menu also includes German pretzels, schnitzel, sausages, and interesting combinations like bratwurst pizza. Also, save room for some sweets so you can try their strudel for dessert.

We love the atmosphere at both locations, it’s a casual German beer hall in Brooklyn that has a modern Old World charm to it. We especially love their portrait paintings hanging at both locations by the bar.

What to Try: Split a Das Boot with a friend, unless you’re extra thirsty and pair with the Nürnburger, a plate of 5 sausages on a bed of sauerkraut and mashed potatoes. 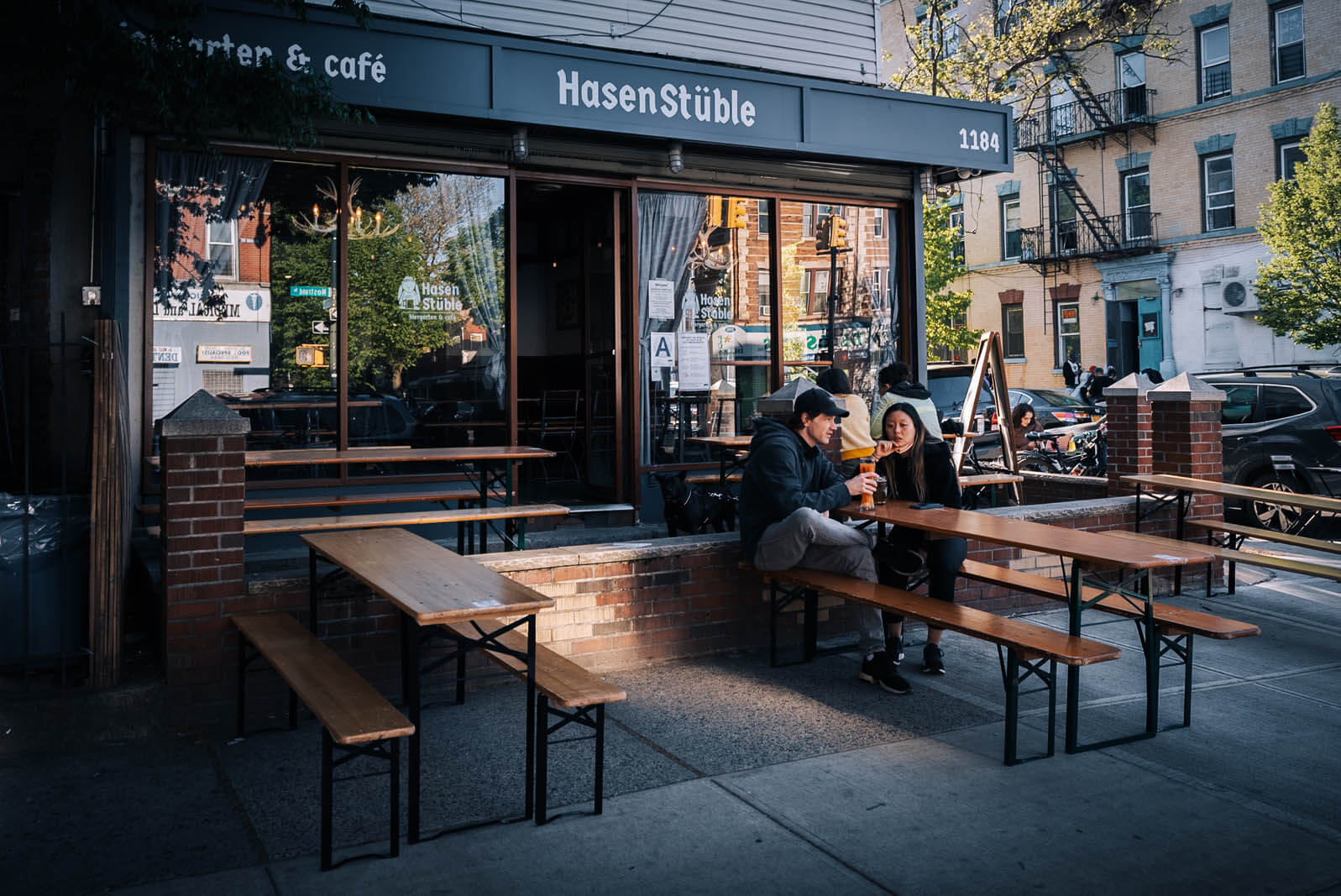 Another awesome, and lesser-known German beer hall in Brooklyn is Hasenstüble in Prospect Lefferts Gardens on Nostrand Avenue brought to all of us by the same owners of DSK Brooklyn – Die Stammkneipe, another one of our favorite German beer gardens in Brooklyn.

Like DSK, Hasenstüble has several German beers on draft including multiple options of weizens, pilsners, lagers, and a selection of specialty German beers as well as cider.

What to Try: If they have currywurst during your visit, this is a must! Served on a pretzel bun you can pour the curry infused ketchup all over your wurst paired with a liter of beer!

This next German beer garden in Brooklyn, well actually in Queens but REALLY close was recommended to us by our German friend who knows the city well, so you know its good and it’s truly authentic! Located a bit further off the beaten path for most visitors to Brooklyn in Glendale, Queens, Zum Stammtisch is worth the extra effort needed to visit.

This German beer hall in Brooklyn feels extra authentic and you’ll even spot some dirndl and if you’re lucky lederhosen here.

Their menu is full of traditional German and Central European fare from herring to spaetzle, steak tartare, goulash, sausages, and various Bavarian specialties to strudel and German chocolate cake on the dessert menu.

They offer a few German beers on draft and you can choose between .2, .5, a full liter, or a 2 liter Das Boot depending on your thirst levels. There are also more imported German beers available in bottles including a grapefruit Radler for those familiar with the lighter, sweeter alcoholic drink.

Besides beer, you can also find a small selection of German wine available too for anyone who wants a break from beer.

What’s awesome about this German beer hall in Brooklyn is that the owners are German immigrants who moved here in the 1950s and opened Zum Stammtisch in 1972 after serving in the US Army. This German beer garden quickly became a popular hang out spot for other German and Central European immigrants in the city.

The original owner and founder John passed away in 1993 but his children have continued the legacy of this German beer hall and even opened a German pork store next door to the restaurant so you can shop and get any items for your kitchen at home.

We love this German beer hall near Brooklyn enough to include it because it has a full Old World charm to it with its interior decor that makes you feel like you’re actually in Germany. They’ve done a good job recreating that feeling here in Brooklyn in their space.

Also, be sure to follow them to find out what specials they offer during Oktoberfest!

What to Try: Try one of their hearty German entrees paired with a liter of your favorite German beer! Also, their strudel looks heavenly! If you’re only feeling snackish, split the pretzel!

Did we miss any of your favorite German beer halls in Brooklyn or beer gardens in Brooklyn? Let us know in the comments below! If you enjoyed this post, bookmark for later or share the love below on Pinterest! 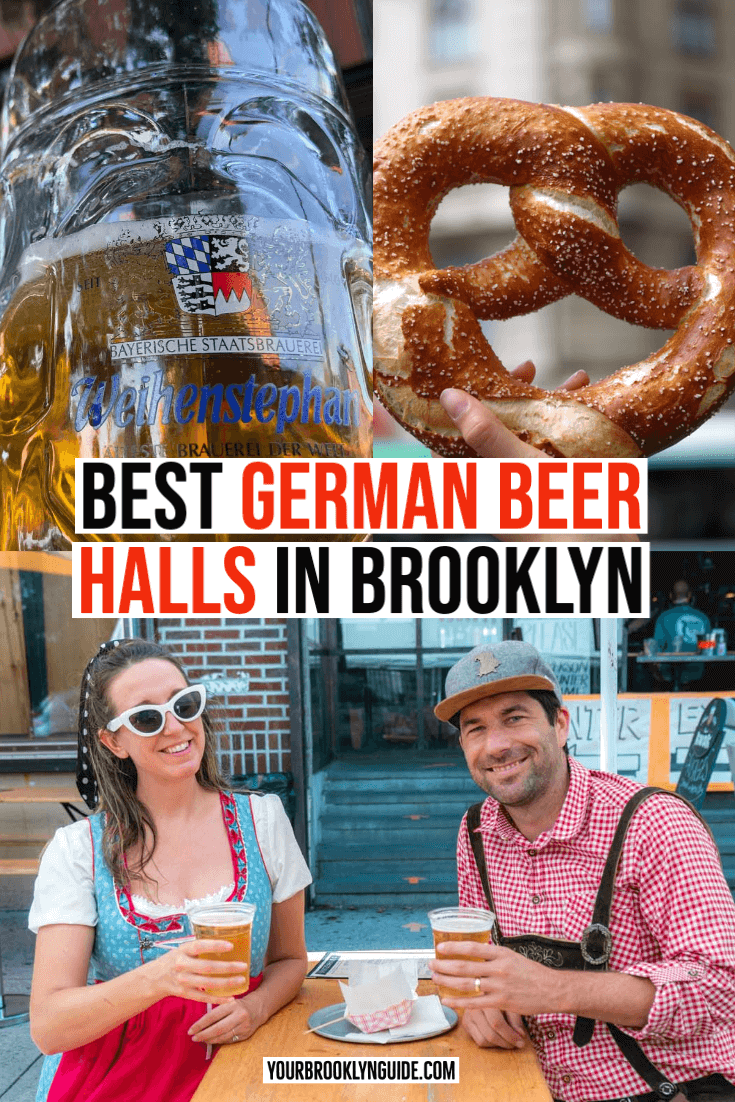