Wondering how to visit the Empire State Building plus tips for your visit? This guide has you covered!

The Empire State Building is not only one of the most popular tourist attractions and tours in NYC, but this skyscraper is one of the most recognized landmarks of the city as well as for the United States. For decades, tourists have been visiting the Empire State Building not only for the historic tidbits but also the sweeping bird’s eye views of the rest of the skyline and city!

Join the list of celebrity dignitaries who have visited this iconic landmark and use our guide to make your visit to the Empire State Building easy breezy. With a little planning ahead you can make one of the busiest tourist attractions in the city more enjoyable!

Overview of the Empire State Building

Knowing more about the building’s history will make you appreciate your experience a lot more. The Empire State Building is a 102-story skyscraper in Midtown Manhattan, New York City, United States.

After one year of building, The Empire State Building was completed in 1931. Right away, it held the record for the world’s tallest building up until 1970 when the World Trade Center was completed.

Located in Midtown South, The Empire State Building was first built as a Waldorf-Astoria Hotel. Since then, it has been remodeled over a dozen times to keep its record of the tallest building!

This Art Deco skyscraper draws in over four million tourists each year! Since its feature in King Kong in 1933, it has been featured in over 250 other movies and television shows. It has also made its name as one of the Seven Wonders of the Modern World by the American Society of Civil Engineers!

The Empire State Building boasts a unique design that distinguishes it from the surrounding architecture. Its short, five-story base occupies an entire lot of the building. The 81 stories above are set back sharply from the base, allowing the rest of the building to be illuminated by sunlight and free from any street noise!

Where is the Empire State Building? 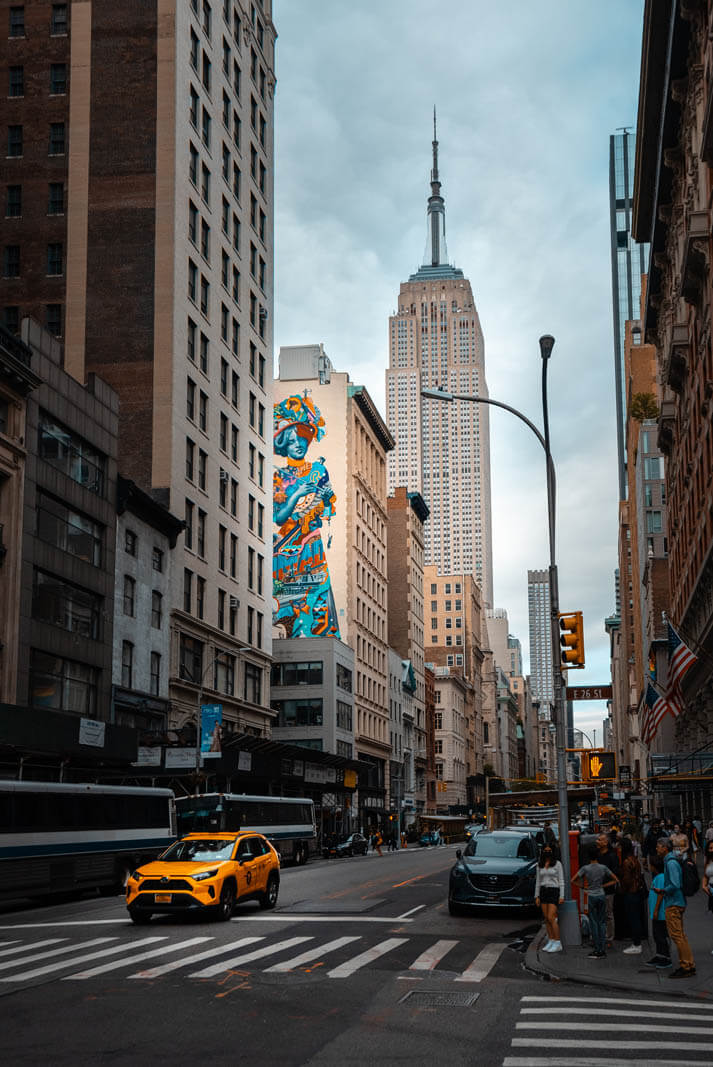 Also, be sure to check out our guide to the best views of the Empire State Building to look at it vs looking from it!

How to Get to the Empire State Building 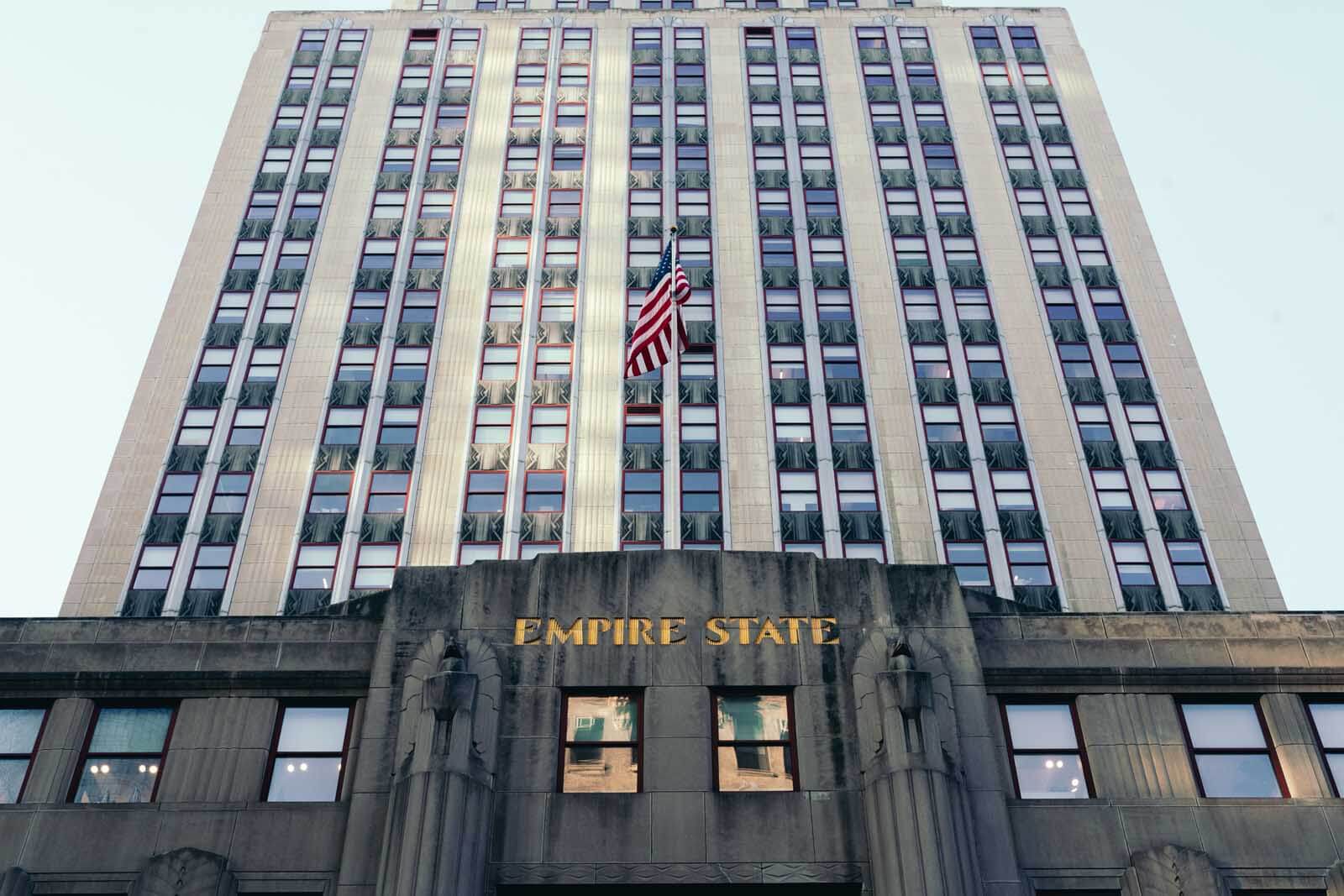 Visiting the Empire State Building is easiest by stopping at Penn Station. Then, it will be right in front of you once you get off at 34th Street! You can take the 1, 2, or 3 train to Penn Station and get off there.

You can also take the B, D, F, N, Q, or R train to 34th St/Herald Square. Once you’re there, you’ll see the building on the East side of the subway! 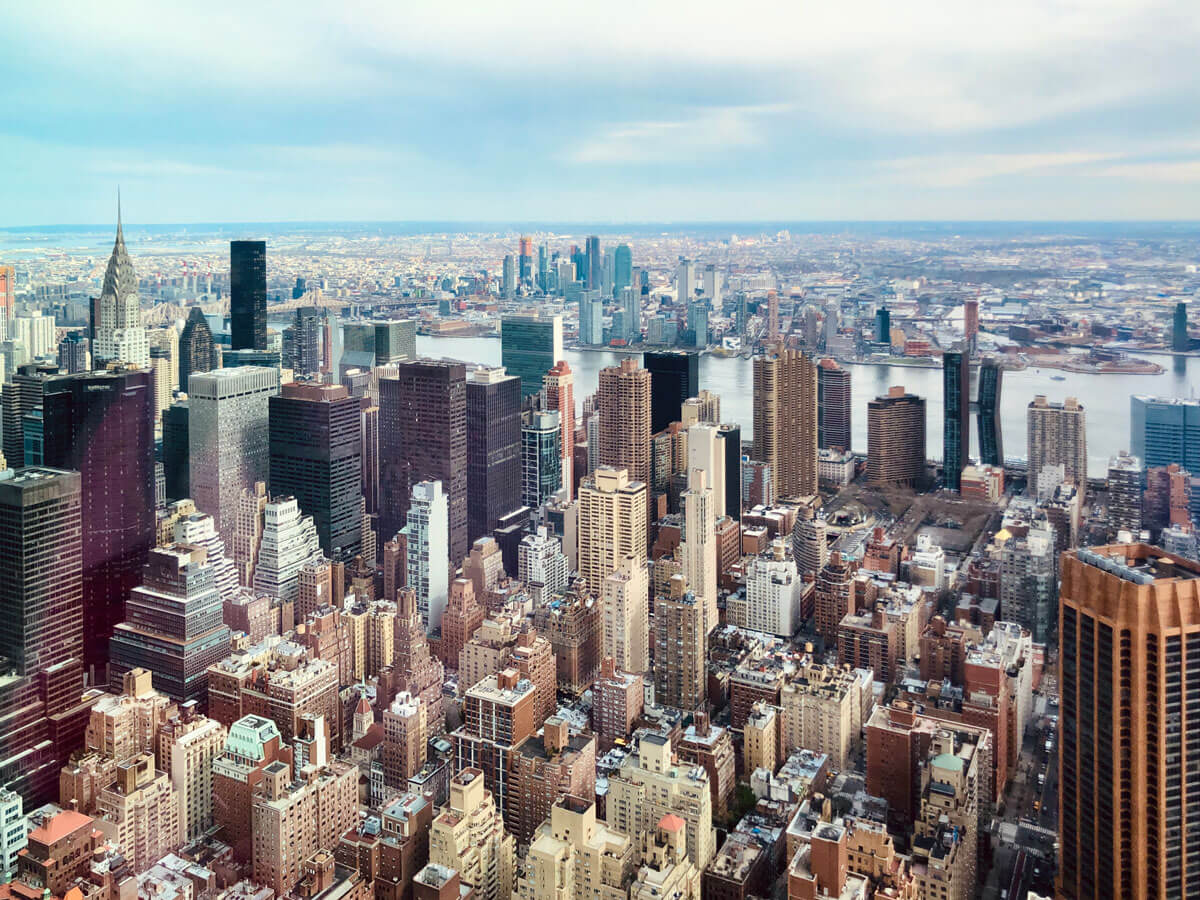 The 80th, 86th, and 102nd floors of the Empire State Building have observation decks where you have a chance to get a view of up to five surrounding states on a clear day, views of the surrounding boroughs, unbeatable views of the NYC skyline including some of the most famous skyscrapers like the World Trade Center and the Chrysler Building, and of course views of Central Park, the Hudson River, and East River surrounding you on the island of Manhattan!

The Empire State Building observatory with the best views is on the 102nd floor, as you’re the highest, but they all do offer incredible views.

You can visit these observation decks day or night, and once you have tickets, there is no time limit to your visit. There is also a gift shop on the 80th floor that’s great for getting souvenirs!

Although all of the observation decks in the building have great views, the view on the very top floor (102) is known to be the best.

On your way up to the 80th floor, there are many exhibits that you can check out to make the most of your visit! Many of these exhibits outline the making of the Empire State Building in the 1920s and the actions that have been taken since to keep this building one of the tallest in the world.

Many other exhibits outline the A-list celebrities that have been to the building, what the workers experience during their time in the building, and hidden views that most visitors don’t get to see.

The stairs above the 2nd floor of the Empire State Building are often entirely closed to the public. However, rest assured that the elevator ride up to the 102nd floor takes less than one minute! In fact, the entire Empire State Building has 73 Otis elevators so that you can be sure you won’t have to sweat or wait in line to get to the top.

One of the most popular exhibits on the 80th floor is the augmented reality experience that lets you learn all about New York City and its most famous landmarks near the building. You can take a realistic tour of the High Line, Grand Central Terminal, and many other spots in Midtown Manhattan at this exhibit!

Some highlights from here are views of the Statue of Liberty, Brooklyn Bridge, Central Park, and the surrounding skyscrapers!

The 80th floor also has an exhibit that lets visitors create a custom itinerary for all five boroughs of the city. At the end, visitors can email this to themselves and rest assured that the rest of their time in the city is planned out.

Lastly, this floor has a large gift shop that’s great for getting souvenirs, paintings, books, and more.

This floor is known for being the site of many famous television shows and movies, including Zoolander, Oblivion, and An Affair to Remember!

On a clear, sunny day, the deck on the 86th floor offers a view of six states: New Jersey, Pennsylvania, Connecticut, Massachusetts, and Delaware. On top of these views, you can also see 360-degree views of the five boroughs!

Although the 86th floor offers a heated outdoor experience during the winter, the 102nd floor is indoors all year round. Although it isn’t much higher than the 86th floor, it is known to have the best views and is worth the extra cost. 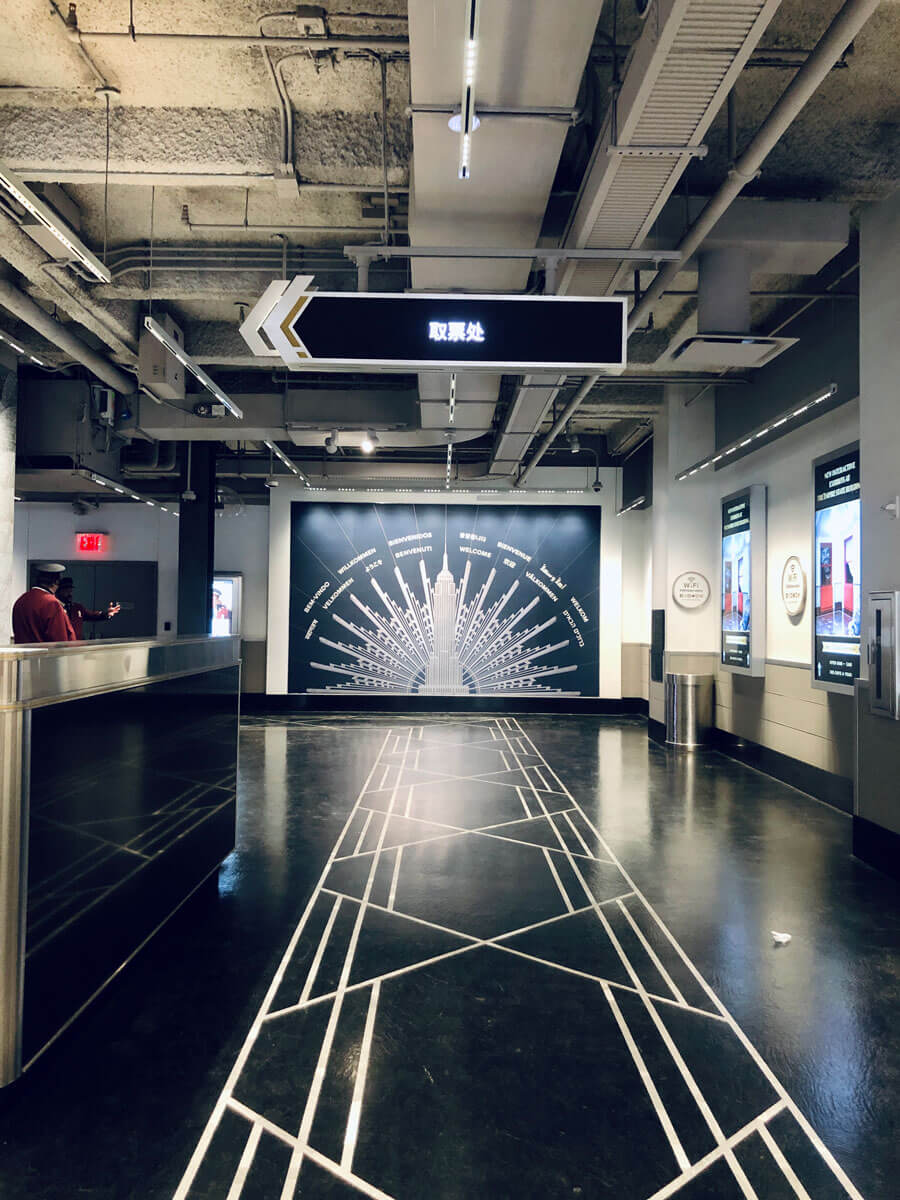 The skip the line tickets are general admission, to see all the other tours and ticket options available visit the Empire State Building website as the tickets vary depending on what you want to see and do, some only include the 86th floor and others include the 86th & 102nd-floor observatories.

Get your tickets in advance here.

Alternatively, you can purchase a discount voucher that gets you into multiple NYC attractions for a fraction of the price if you plan on doing multiple activities on your trip to save money and hundreds of dollars! All you have to do is pick which attraction pass is best for your visit, make a one time purchase, and then the attractions are free or included in your pass!

CityPASS offers a 3 attraction pass or a 6 attraction pass with over 12 city attractions to choose from including the Empire State Building. Using this pass instead of buying individual tickets can save up to 35% equaling hundreds of dollars in savings.

Another great option is the New York Pass which you can purchase anywhere from a 1 Day Pass to a 10 Day Pass that gets you into over 100 attractions. Once you purchase your New York Pass you download the Go City app and use that to get into the popular NYC attractions as well as some hidden gems.

Using New York Pass instead of buying individual attraction tickets can save you hundreds of dollars and up to 45% savings on popular attractions including free admission to the Empire State Building!

How Long do you Need to Visit the Empire State Building? 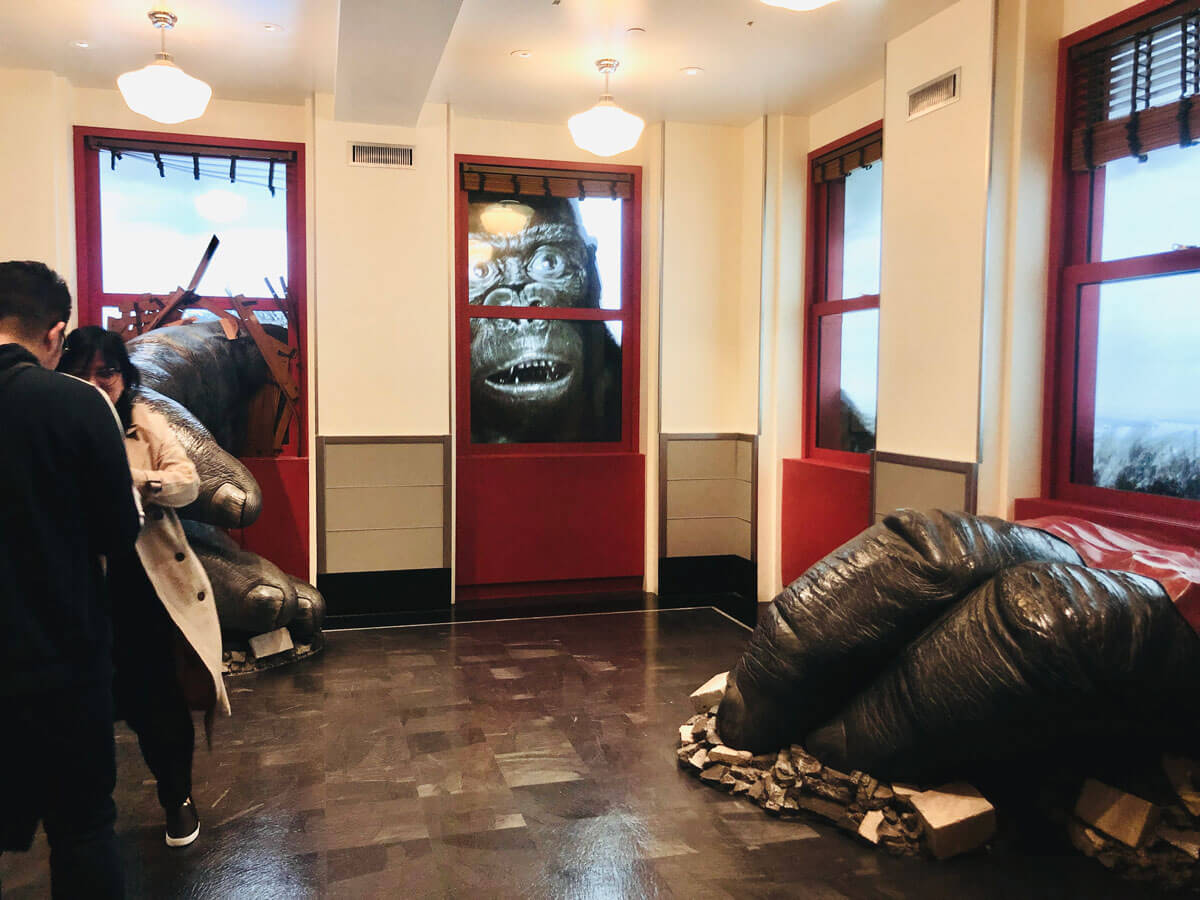 When you see all of the exhibits, touring the Empire State Building will typically take at least 90 minutes. Although the building recommends at least one hour for your visit on their website, most visitors end up staying closer to 2 hours. That way, you can see the immersive galleries, observation decks, and gift shop.

We recommend planning for the full time as when it’s busy you can’t just go straight to the top, you will have to go through all the exhibits along the way to get to the elevators taking you up to the observatories. 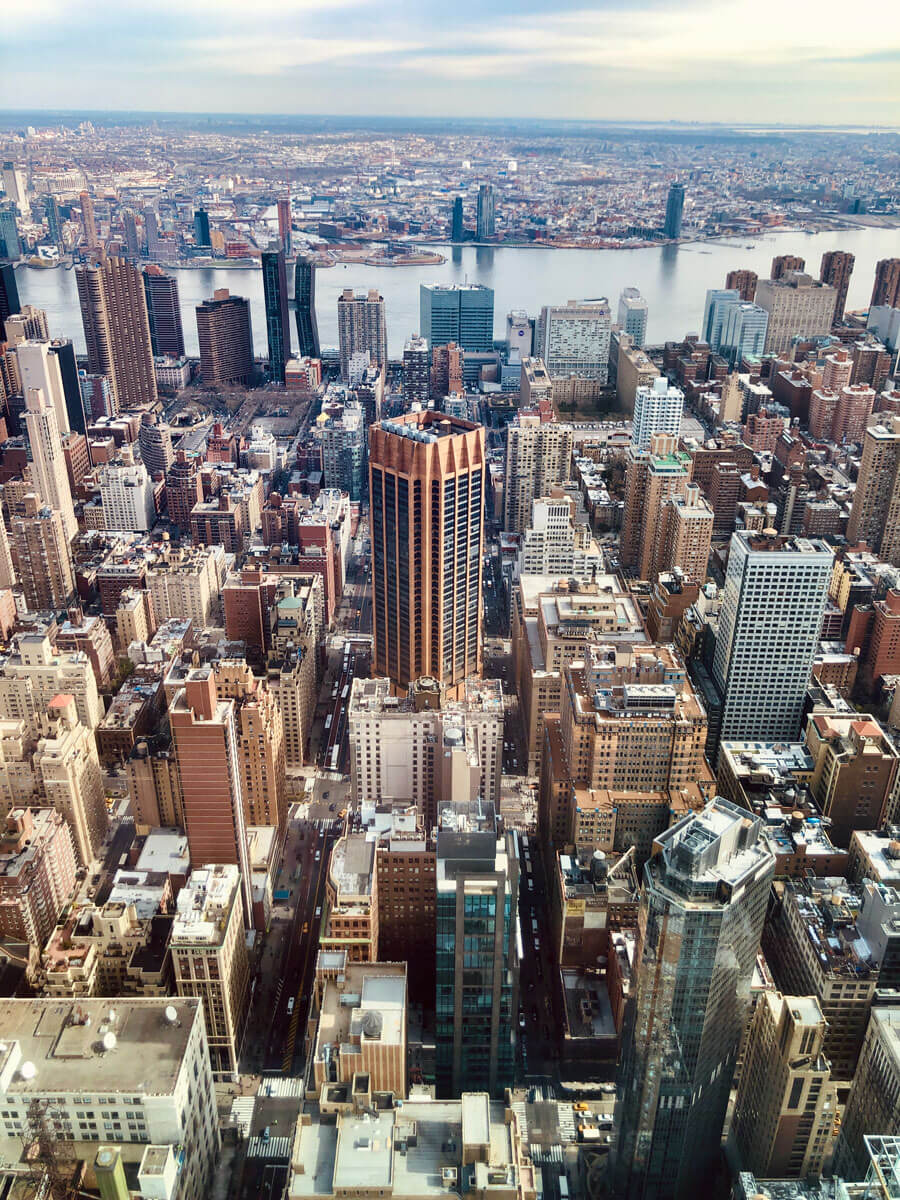 The Empire State Building is open 24-hours a day, 365 days a year and one of the most popular things to do in NYC. Although many visitors love visiting the observation decks during the daytime, touring the Empire State Building at night is also an option and great idea if you want to experience the observatories at a less busy time. The views are incredible and there are typically fewer crowds during the later hours!

While touring the Empire State Building, it’s essential to remember that the most popular time to go on the observation decks is during sunset. Although the view at this time is excellent, keep in mind that it will be crowded.

Throughout the year, summer vacation through Christmas is the busiest time for this building. If you want to visit one of the observation decks during the spring or winter, you can expect to see fewer crowds!

Each floor in this building offers a unique view. While the 86th floor provides an outdoor experience that lets you see up to five states on clear days including New Jersey, Pennsylvania, Connecticut, Massachusetts, and Delaware.

For NYC views you can see 360 views of Brooklyn, Queens, and beyond including some of the other famous skyscrapers

The 102nd-floor deck enables you to see 360-degree views in a glass-enclosed elevator!

It’s best to visit the Empire State Building on a day where you know there won’t be rain, clouds, or fog in the sky.

The Empire State Building is ADA compliant, if you need to use the ADA compliant and accessible entrance head to the main entrance at 20 West 34th Street.

Inside the Empire State Building is STATE Grill and Bar. This is one of the most popular restaurants in Midtown Manhattan! This American restaurant offers street-level views and art deco design inside.

Another excellent dining option on the ground floor is Tacombi. Voted to have the best fish taco in the entire state of New York, this Mexican restaurant offers great margaritas and fresh tacos! Although, I’d say go for the pastor tacos or the avocado tostada.

If you’re searching for a quick bite to eat on the ground floor of the building, you can also stop by the Chipotle, Starbucks, Chopt, Sushi-Teria, or Juice Press!

If you have a little more flexibility with your dining and schedule, head to Koreatown for some of my personal favorite areas for cuisine! Great options include Korean BBQ at Jongro BBQ or Baekjeong, most restaurants can be found on W 32nd Street between Broadway and 4th Avenue just a few minutes walk from the Empire State Building.

Hotels Near the Empire State Building: 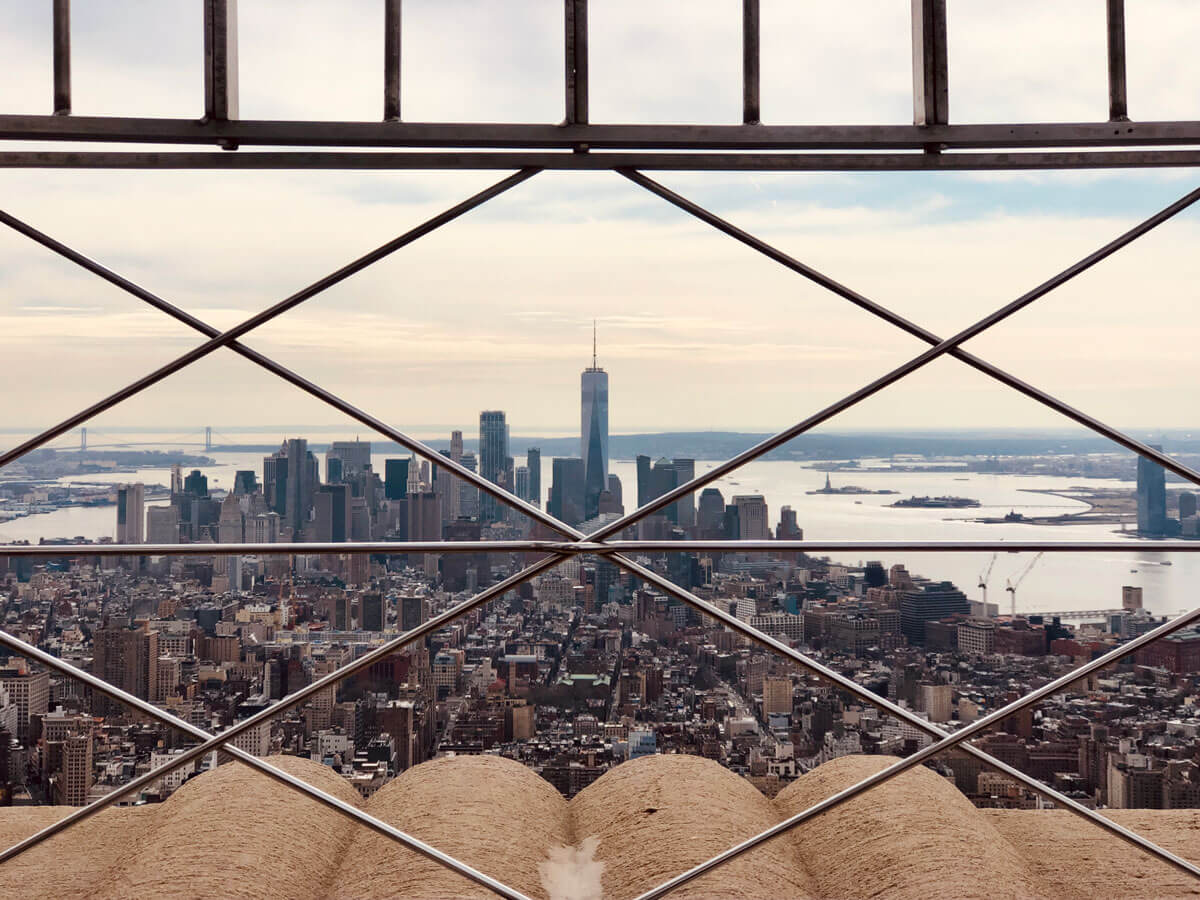 Nyma – The New York Manhattan Hotel features modern rooms and is where you can find the rooftop lounge, Cloud Social on the terrace level that offers direct views underneath the Empire State Building. Book here.