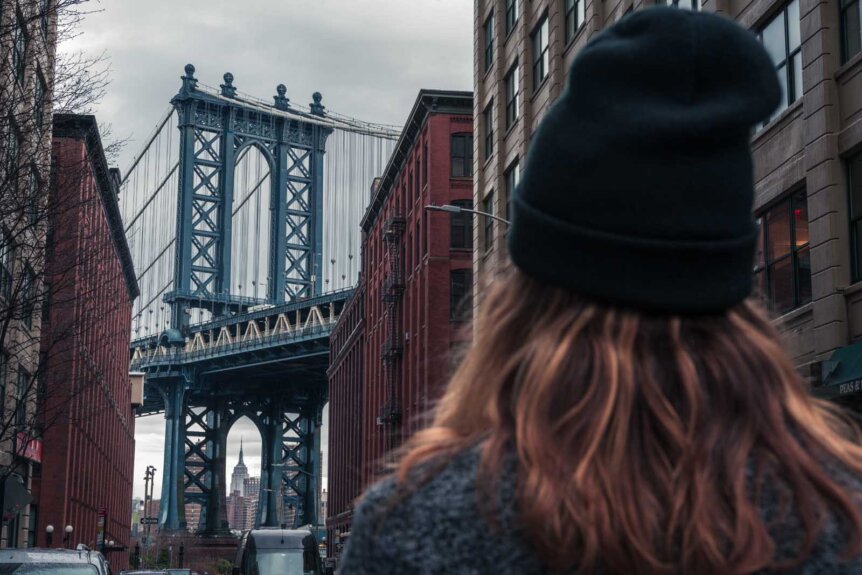 One of the most popular neighborhoods to visit in New York City including some of the best views of the skyline, Brooklyn Bridge, and Manhattan Bridges is here in DUMBO, Brooklyn.

But what does DUMBO stand for in Brooklyn?

Our article will cover what DUMBO stands for, how it got its name, highlights of the neighborhood, and some amazing tours to try in DUMBO to learn more about the fascinating history of this neighborhood. 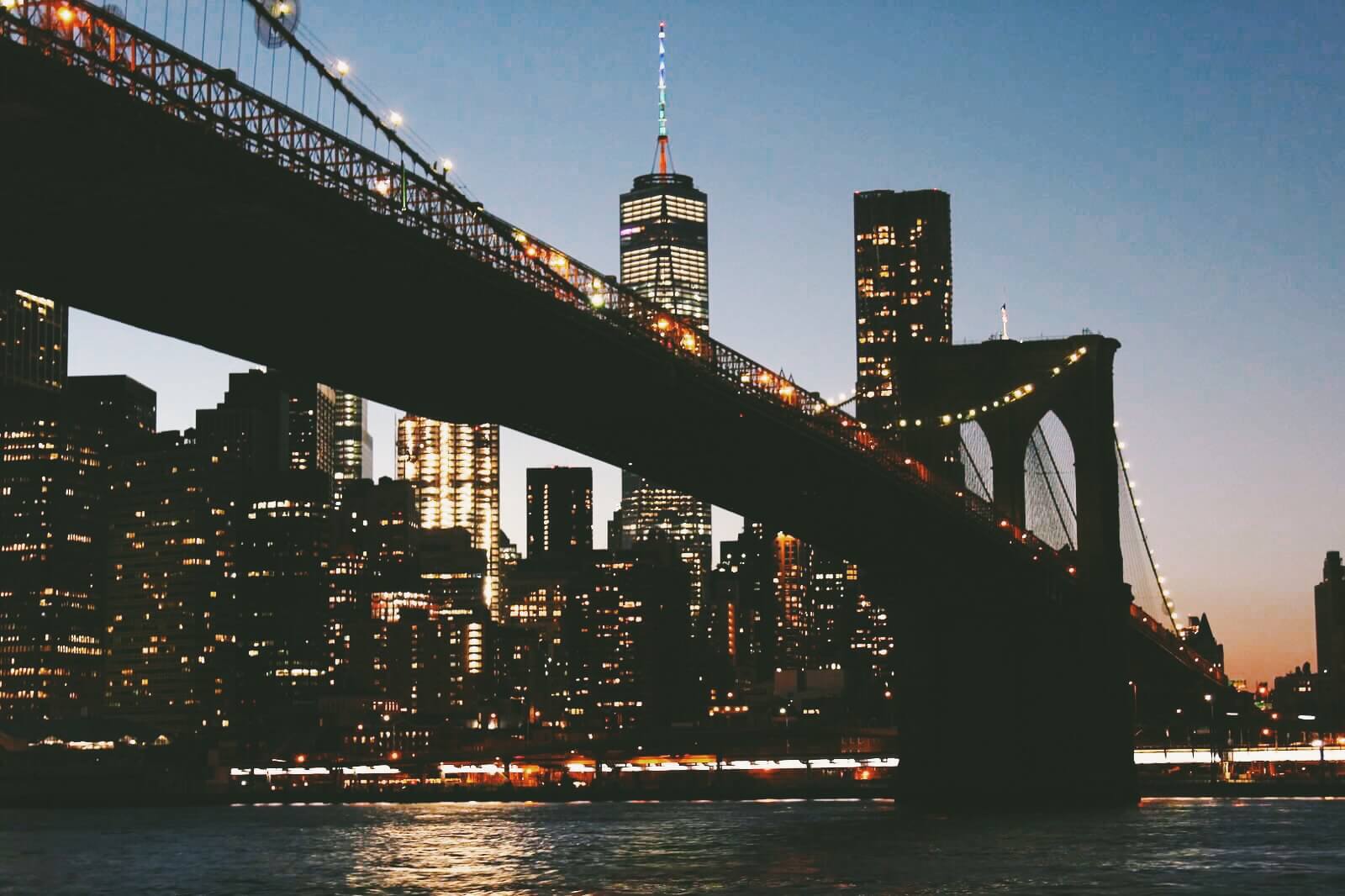 DUMBO is a neighborhood in Brooklyn, one of the five boroughs of New York City. DUMBO was once called Gairville, and its geographical mass spreads from the edge of the Brooklyn and Manhattan bridges where Manhattan and Brooklyn intersect and spreads eastward from the Manhattan Bridge into the Vinegar Hill neighborhood.

The DUMBO neighborhood has Brooklyn Bridge Park and the East River as a boundary to its north, while Brooklyn Heights acts as its southern border. Vinegar Hill borders DUMBO to the east, while the Brooklyn Bridge is its border to the west.

Anyone trying to locate or visit DUMBO can do so pretty easily, it’s directly across the Brooklyn Bridge and Manhattan Bridge, two iconic landmarks of New York City.

There are two subway stops to get in and out of DUMBO are the F train at York Street and the A or C trains at High Street.

To get a MetroCard to ride the subway you simply need to go into the station and use a credit card at the kiosk to buy a MetroCard and load it. Single journeys are currently $2.75.

What does DUMBO stand for in Brooklyn 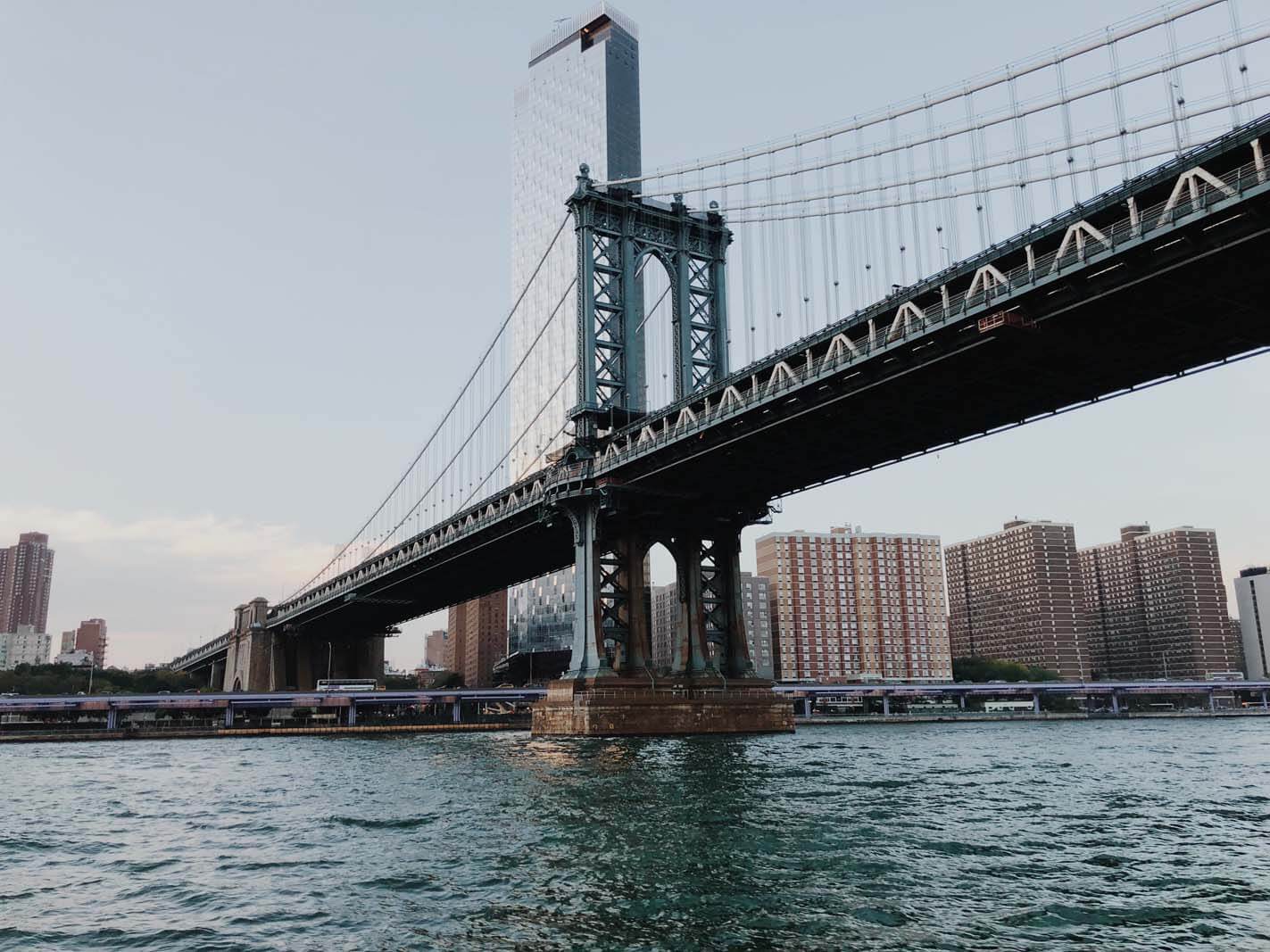 With a stand out word like DUMBO being talked about, you might find yourself wondering what does DUMBO stand for? Especially since there’s a famous Disney movie featuring a cartoon elephant with the name Dumbo. Surely this cannot be about a flying circus elephant.

Dumbo the elephant does not have much to do with the borough of Brooklyn, other than DUMBO does do an annual Great DUMBO drop playing on words and featuring small, flying elephants.

So what does DUMBO stand for in Brooklyn, then?

DUMBO is the abbreviation that stands for “Down Under the Manhattan Bridge Overpass”. The origin of this name goes far back.

Some even argue that what DUMBO stands for in Brooklyn is, “Down Under the Manhattan and Brooklyn Overpasses,” which also makes sense.

Read on to understand how DUMBO got its name.

How DUMBO got its name 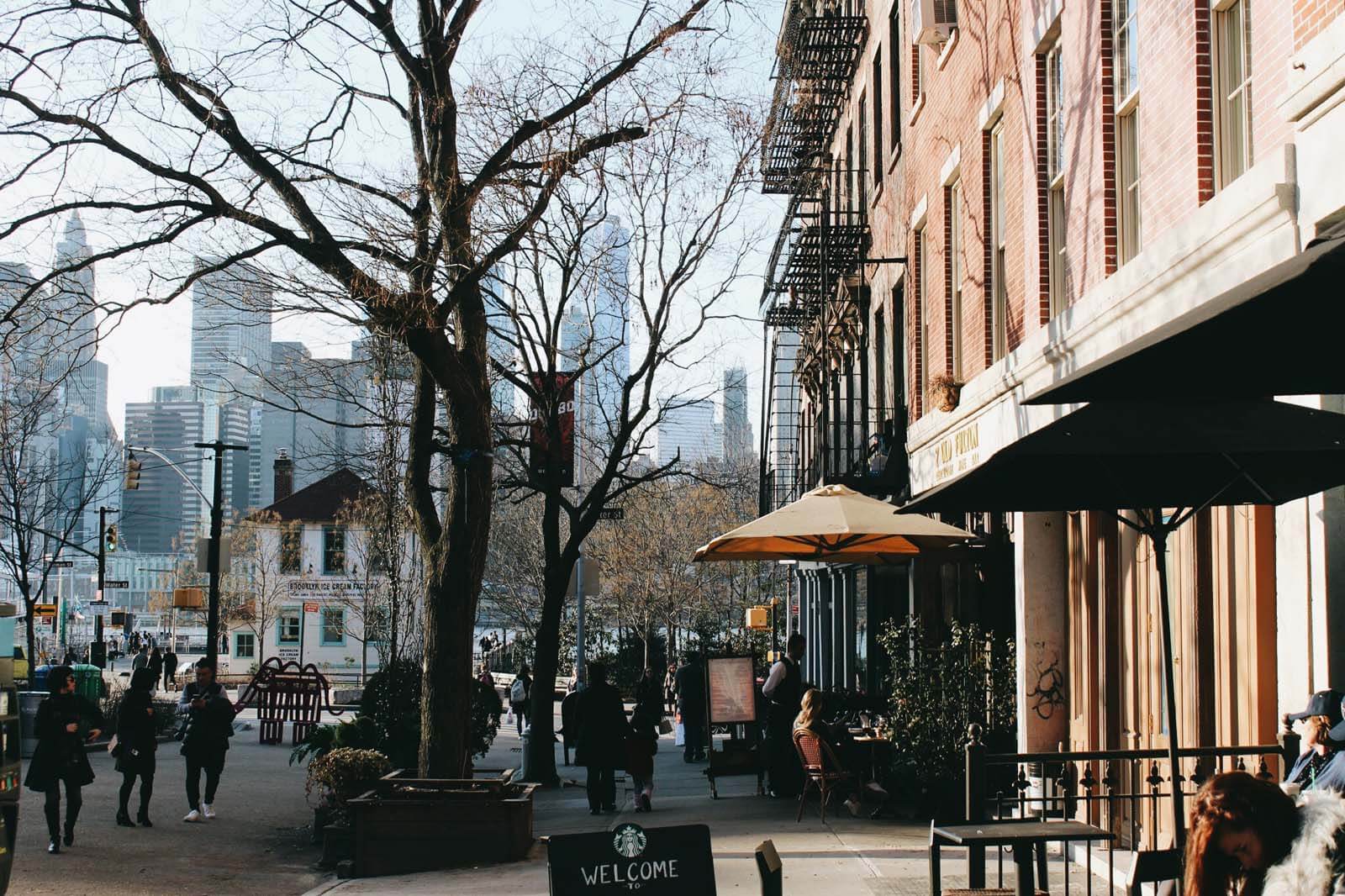 Now that you know what DUMBO stands for in Brooklyn, we’re going to explain how the name DUMBO came about.

Back in the 1970s, the area now known as DUMBO was just forty blocks that had the Navy Yard, the BQE, and Fulton Street as its boundaries. At the time, the people that lived and operated in these areas were merchants, manufacturers, and a handful of other residents.

However, because these buildings had only one elevator, few manufacturers were willing to rent out the top floors and landlords in the area all had the top floors of their properties empty. The emptiness persisted even after rent rates were slashed by about 70%.

This became a big problem for the John Lindsay administration, who wanted to help the landlords in that area make efficient use of their property. The issue of unused assets cropped up in another area for the Lindsay admin – there seemed to be a lot of people that were trying to get into New York.

These were the creatives; writers, musicians, entrepreneurs, and others who could not afford high rent and would trade the ‘lesser than’ living conditions to be in New York City.

As such, the “Artist in Residence” program was started. One at a time, buildings in the Two Bridges area began converting top floors to “live/work” spaces.

With the rates of the spaces going at manufacturing rates, the landlords were able to fill their top spaces, while the creatives got a place to stay for cheap.

Of course, everything that could go wrong with this plan began to go wrong. There were issues of overcrowding, improper background checks, among other issues.

Soon these spaces were filled with all sorts of people and the Two Bridges area became quite unruly. There were other issues, of course. The spaces which were being rented were never meant for residential purposes and so living qualities were terrible.

Landlords had also begun flipping loft units; getting people to move in and fix the spaces up and then kicking them out with flimsy excuses and renting out the same spaces at higher prices.

After a while, the State and City officials came up with legislation to standardize the living arrangements in the Two Bridges area and its mixed-use buildings.

By the 80s, the Two Bridges area was doing relatively well. The live/work units were fully occupied, the manufacturing companies had a good stream of labor, and the other communities were benefitting from the symbiotic relationship.

However, as time went by, the city began to make plans to convert the entire area from a live/work area to a fully residential one.

That’s the history lesson of DUMBO, but that still does not explain how the area got its name. Well, in 1978, the community decided that it should have a name and chose a committee to decide on a name.

They came together to drink beer and share their minds. After a while, they came up with two options.

The first was DANYA, which stood for District Around the Navy Yard Annex. The second was, of course, DUMBO.

The options were presented to the community and, of course, history has shown which name was chosen. 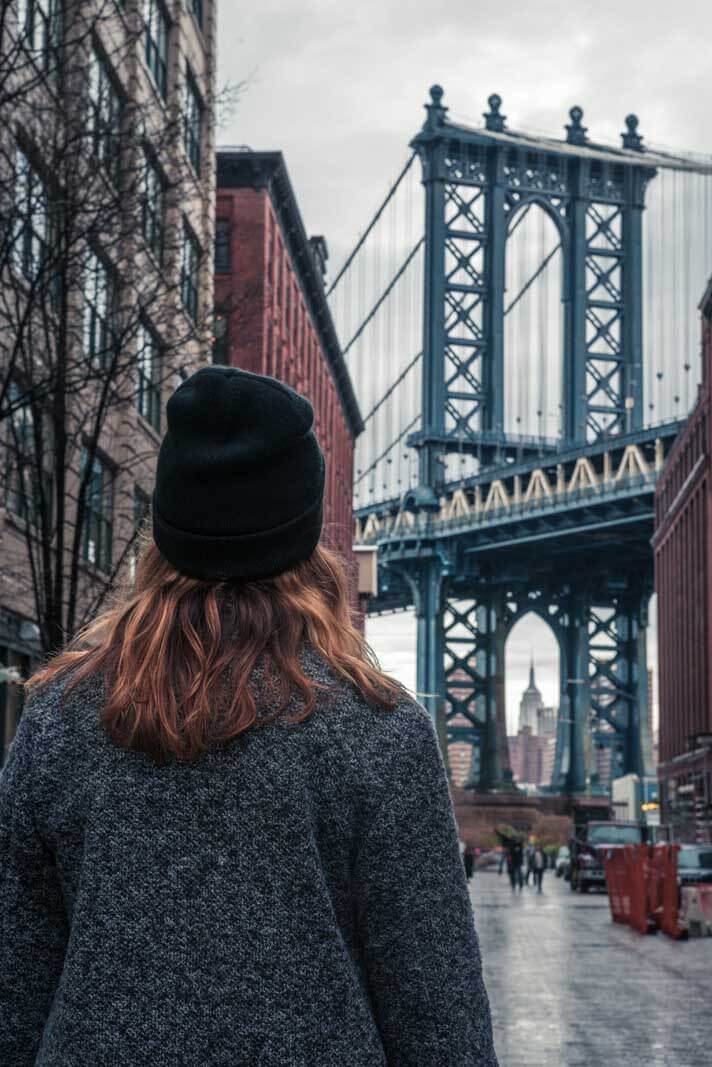 When you visit DUMBO, it’s hard to believe that this was the place where starving artists once lived. Today, this neighborhood is considered one of the most desirable in the city to live in as well as one of the most expensive.

With sweeping waterfront views of the Manhattan and NYC city skyline, both the Manhattan Bridge, and Brooklyn Bridge you really have some of the best city landmarks all from right here.

To learn more about how to spend your time in the neighborhood be sure to read our guide to all the best things to do in DUMBO.

Also, if you’re a fan of a good old-fashioned love story and engineering marvels, read all about the history of the Brooklyn Bridge.

Try a Tour of DUMBO 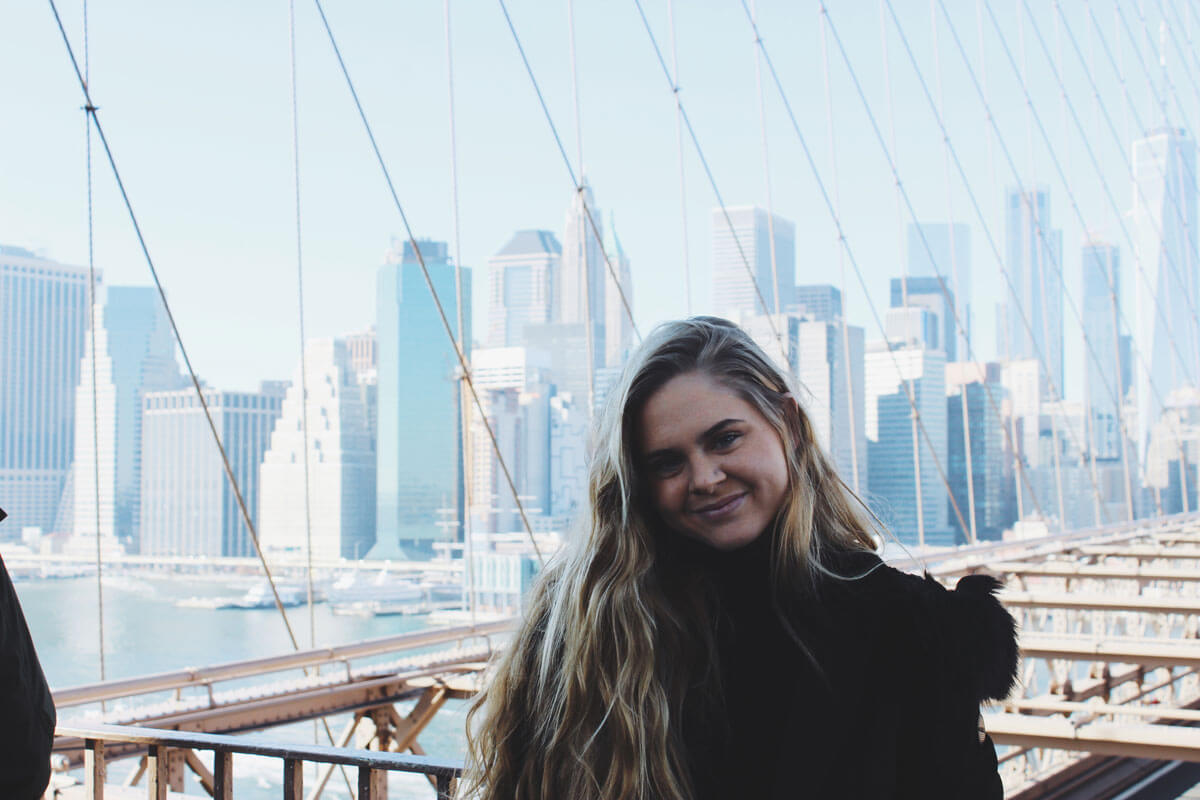 Now that you’ve learned about what the meaning of DUMBO is and how it got its name you can learn more about this neighborhood on a guided tour with a local! There are two great options below.

Enjoy a 2-hour walking tour of DUMBO and the Brooklyn Bridge uncovering the history of the borough’s diversity and history including some of the most incredible views of the city!

Along the way, you’ll learn about the history of the East River and the behind the scenes story and history of building the famous Brooklyn Bridge that’s truly fascinating and actually full of drama as well as how it affected the relationship between Manhattan and Brooklyn.

You’ll also learn about other important monuments and get an in-depth tour of DUMBO and it’s scenic views and history.

Enjoy a customizable 2 to 3 hour private Brooklyn Bridge and DUMBO Waterfront tour with a licensed and professional local guide covering the history of the Brooklyn Bridge, architecture, waterfront district, and the challenges this city faced during its construction.

Your guide is a 4th generation local who is knowledgable on the entire history of this borough and the area of DUMBO.

You’ll learn in depth history on DUMBO and Fulton Ferry and can extend your tour to Brooklyn Heights, one of the most historic neighborhoods in the city.As you cross the infamous Brooklyn Bridge you’ll learn the history and politics behind the construction, learn about the history of DUMBO and how locals tried to trick real estate developers into not building here, and how the neighborhood became what it is today.