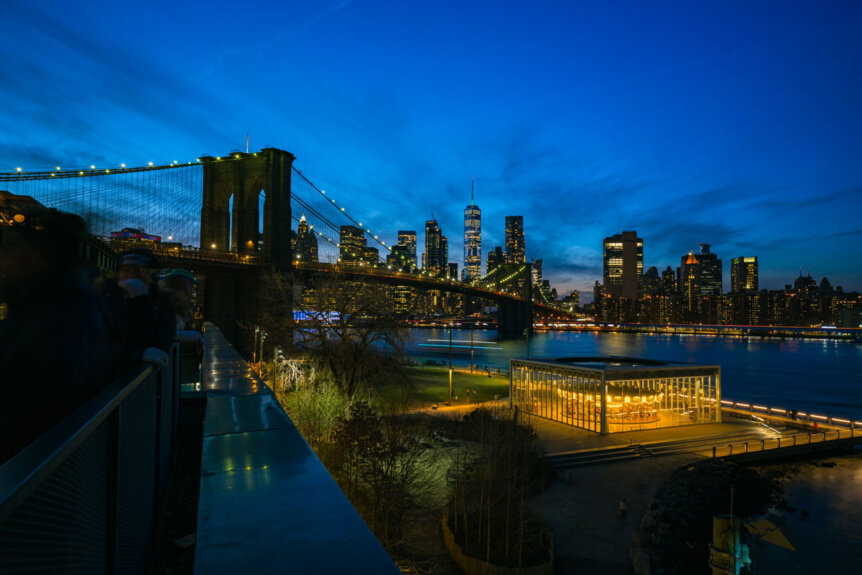 Want to feel the love of Brooklyn through music? You’ve come to the right place, check out all the best songs about Brooklyn and Brooklyn anthems to listen to before your next visit, when you’re missing the city, or just to jam out while you’re exploring – any way you want to listen to these Brooklyn songs we won’t judge you!

Check out the best songs about Brooklyn and let us know if we missed any of your favorites! 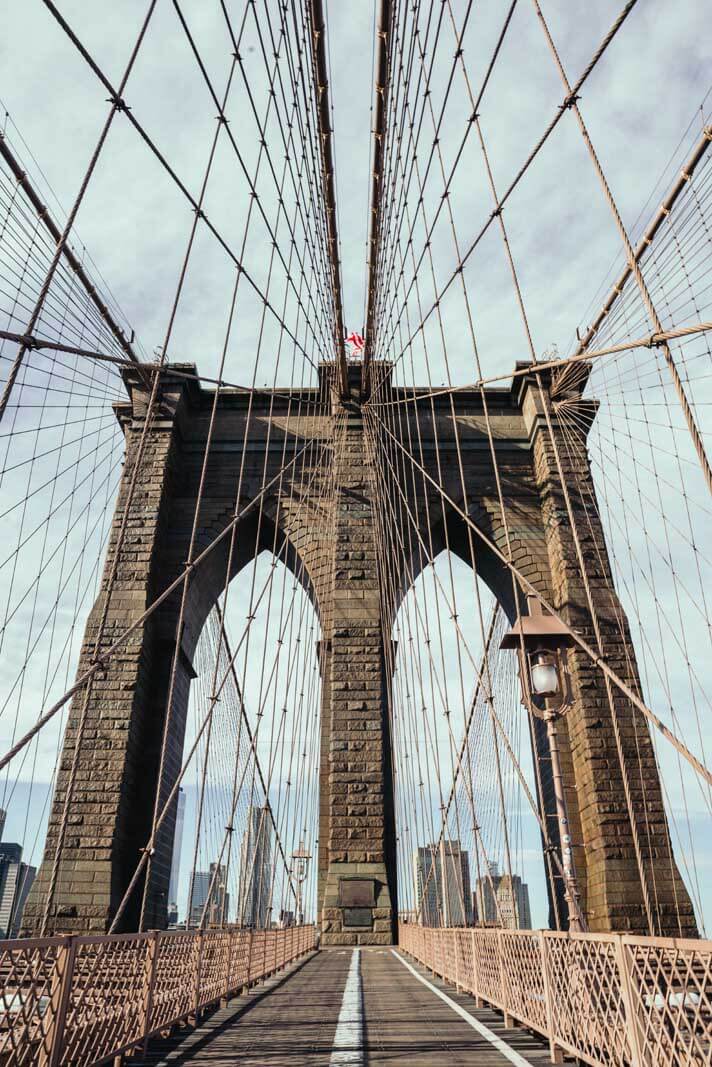 No Sleep Till Brooklyn by Beastie Boys

This is an obvious pick as undoubtedly one of the best songs about Brooklyn and one of the most well known by the Beastie Boys!

Believe it or not, this Brooklyn song is actually a parody poking fun at glam and heavy metal music.

Because they needed the song to sound the part, they needed a guitar riff which was played by a guest guitarist Kerry King from the band Slayer. This was an odd pairing, as neither parties particularly liked eachother.

Jay-Z, another Brooklyn artist and no stranger to songs about Brooklyn, performed this song as a tribute to the Beastie Boys at a music festival in 2009.

Favorite Brooklyn Song Lyrics: “Before I get to sleep, ‘Cause I’ll be rockin’ this party eight days a week!, No sleep till, No sleep till Brooklyn!“

Next up, another amazing Brooklyn song and Brooklyn Anthem belongs to this borough-born rapper Yasiin Bey, aka Mos Def. And, according to this Gothamist article, “Mos Def is responsible for some of the most vital and dynamic New York hip-hop ever.”

In 2013, he publicly retired. But that doesn’t mean we can’t enjoy some of his best work including some of the best songs about Brooklyn.

You can find this Brooklyn track on his 1999 album, Black on Both Sides. Brooklyn is a three-movement piece with three verses on three different beats dedicated to his old stomping ground and neighborhood Bedford-Stuyvesant, aka Bed Stuy.

This round up of best songs about Brooklyn would be incomplete without one of Brooklyn’s most legendary musicians and artists, Jay-Z and Notorious B.I.G.

This hip hop song about Brooklyn is from Jay-Z’s first career, 1996 album Reasonable Doubt. While this has become one of the most well-known Brooklyn songs and hip hop collaborations of all time, this song almost didn’t happen. At the time, Jay-Z and Biggie Smalls didn’t know each other.

Another famous Brooklyn song by hip hop artist Ol’ Dirty Bastard from his 1995 album Return to the 36 Chambers: The Dirty Version. This song about Brooklyn was ODB’s second highest-charting single behind one of the most famous hip-hop anthems of all time, “Got Your Money.”

Ol’ Dirty Bastard was the second member of the Wu-Tang Clan to release a solo album and have a successful solo career.

While the song is not about Prospect Park Zoo, aka Brooklyn Zoo, this song about Brooklyn refers to the group, Brooklyn Zu who ODB is close with.

Favorite Brooklyn Song Lyrics: “Shame on you when you step through to the Ol’ Dirty Bastard, Brooklyn Zoo!”

Indie Pop and Psychedelic Rock queen Lana Del Rey brings us our next favorite song about Brooklyn. Lana Del Rey, a NYC born musician, song writer, and performer wrote this song with her boyfriend and was originally meant to be performed with Lou Reed, who is mentioned throughout the song’s lyrics several times.

Lou Reed, who is also featured in some of our favorite songs about NYC, is a rock legend who was born in Brooklyn. Apparently, on the day they were scheduled to have a meeting in the studio, Lou Reed tragically passed away.

You can find this Brooklyn tune on Lana Del Rey’s 2014 album, Ultraviolence.

Our next Brooklyn song comes by Brooklyn born musician and artist, Barry Manilow. Manilow’s song, “Brooklyn Blues” comes from his 1987 album Swing Street as well as a live performance on his 1990 Live on Broadway album.

This song about Brooklyn is often referred to as an autobiography of Manilow and returning to his home town and reflecting about his roots in Brooklyn.

Brooklyn Bound by The Black Keys

One of my favorite bands who comes from near my hometown in Akron, Ohio are The Black Keys. Even though this wildly popular rock band had a break up for a few years, they came back out with an album in 2019, their future is unknown but let’s get to their song about Brooklyn!

Brooklyn Bound which can be found on their first album in 2002, The Big Come Up.

This Brooklyn song however has very few lyrics and is a breakup song, and because of how short the lyrics are, we are including all of them below.

Favorite Brooklyn Song Lyrics: “Well I hate to leave you, hate to put you down, But that way you love darling, oh I’m Brooklyn bound, I ain’t got no money, no house on that hill, Well I’m leavin’ you babe, and say fare you well, Well I’m goin’ out east darlin’, hope you burn in hell“

Our next Brooklyn song is literally a Brooklyn anthem, titled B.K. Anthem by rapper Foxy Brown. This Brooklyn ballad can be found on her third album Broken Silence released in 2001, which was nominated for a Grammy.

This Brooklyn born artist was signed on her first music label at the young age of 16. This song about Brooklyn has a cool music video that was shot with what looked like a handheld camcorder.

She also released a mixtape in 2005 called Brooklyn Don Diva.

Favorite Brooklyn Song Lyrics: “I grew up in the thoroughest borough – B.K., Where B.I.G. had everybody rockin’ D.K.“

Another awesome Brooklyn anthem from artist Jay-Z, this time collaborating with artist Santogold (Santigold). Brooklyn Go Hard was originally the theme music for the Notorious B.I.G. biopic titled Notorious and used again for the Jackie Robinson biopic, 42: The True Story of an American Legend in 2013.

This song was recorded with alternative artist, Santigold in 2008 and Kanye West produced this hit. There was also an official remix of this song about Brooklyn that also featured artists Foxy Brown and Wayne Wonder alongside Jay-Z and Santigold.

Brooklyn on a Saturday Night by Neil Diamond

Some of the most popular American musicians are from Brooklyn, including legendary Neil Diamond who is from Coney Island.

This entire song about Brooklyn tells the tale of a guy and a girl who meet in Brooklyn on a Saturday night by describing the night as one where some came for the dancing, and others came for a fight.

The girl came with another man, who is described as a punk. The two men get into a fight and it ends with a blade being brought out and the girl, sadly ends up face down in the dirt in the end.

Stayin Alive by The Bee Gees

One of the most famous songs from the 1970s that many don’t know is a song about Brooklyn is Stayin Alive by The Bee Gees.

This song was used to play over the opening credits of the famous John Travolta movie, Saturday Night Fever to set the scene for Brooklynite Tony Manero’s love of disco and dancing. This film, Travolta’s fame, and disco made this song legendary.

While the lyrics don’t explicitly use Brooklyn, the song does talk about New York and those who are familiar with the movie know Tony Manero is indeed in Brooklyn enjoying the disco.

This Brooklyn anthem is for the ladies of Brooklyn! Released in 2014, this catchy song wasn’t loved by everyone, as a matter of fact, Entertainment Weekly has an entire article dedicated to how this was one of the most hated songs.

Much like Rebecca Black’s YouTube hit Friday, this song was getting alot of ‘hate views.’ The song is full of Brooklyn stereotypes and unfortunately, the juvenile artist Catey Shaw received hate messages and threats from this song.

If you’re not a fan of getting catchy and vapid lyrics stuck in your head, then maybe skip this song about Brooklyn.

This Seattle based band loves New York City and in this song about Brooklyn, the few lyrics are all about Coney Island. The band has performed at many New York City venues including the Brooklyn Museum, the Williamsburg Waterfront, and many others while always professing their love to the city in between songs to their fans.

Anyway, this song is about being at Coney Island, the lights are off which is unlike Coney Island for those familiar with all the attractions at the historic Brooklyn amusement park and yet while it was quiet and lonely he enjoyed the Atlantic breeze from the ocean.

This Brooklyn song is most likely a metaphor and little to do with actual Coney Island but it’s still up for interpretation for the listener and we can’t help but love anything that mentions Brooklyn!

Favorite Brooklyn Song Lyrics: “And everything was closed at Coney Island, And I could not help from smiling, Brooklyn will fill the beach eventually, And everyone will go except me”

Read Next: Best Beaches in Brooklyn

This next Brooklyn song is by the Brooklyn rap supergroup known as the Crooklyn Dodgers. Their song, Crooklyn was released in 1994 and features three Brooklynites including rapper Special Ed who has not been heard or seen from for four years prior to the release of this song about Brooklyn.

This song about Brooklyn was made for the Spike Lee film, Crooklyn and was produced by Q-Tip of A Tribe Called Quest.

Better yet, The music video for this Brooklyn anthem featured Brooklyn-born celebrities and athletes Michael Jordan and Mike Tyson.

And another Brooklyn song by the legend Mr. Neil Diamond. Brooklyn Roads would be Neil Diamond’s first single after signed with MCA Records, after switching labels. The lyrics in this song introduced the orchestrated storytelling style and sound that Neil Diamond became famous for.

Neil Diamond famously performed this song about Brooklyn on his 2008 tour accompanied by a video montage from scenes of Brooklyn.

Favorite Brooklyn Song Lyrics: “I built me a castle, With dragons and kings, And I’d ride off with them, As I stood by my window, And looked out on those, Brooklyn Roads”

Another Brooklyn anthem by the Beastie Boys who are no stranger to Brooklyn. This song is Section E of B-Boy Bouillabaisse, the 15th and final track on the 1989 album Paul’s Boutique.

Other references include reggae songs including Buffalo Soldier by Bob Marley and Broader than Broadway by Barrington Levy.

Another reference is from the song Tangled Up in Blue by Bob Dylan. The original lyrics from Dylan are, “The only thing I knew how to do was keep on keepin’ on” and the Brooklyn song lyrics in Hello Brooklyn are “”Keep keepin’ on, I don’t care what they say.”

Favorite Brooklyn Song Lyrics: “New York, New York it’s a hell of a town, You know the Bronx is up and I’m Brooklyn down”

Lou Reed, a famous New Yorker who had a successful career as a songwriter, musician, and performer with the hit band The Velvet Underground went on to have his own solo career and rightfully has legendary status in the music world.

This Brooklyn song is also the name of his 1975 album Coney Island Baby. This album showcased one of many of Reed’s musical transformations and this album was more pop than any of Reed’s previous music.

This album was well received and critics even said that this was the best band performance he had since he was still a part of the Velvet Underground.

Did we miss any of your favorite songs about Brooklyn? Let us know in the comments below! We are always looking to add to our Brooklyn playlist! 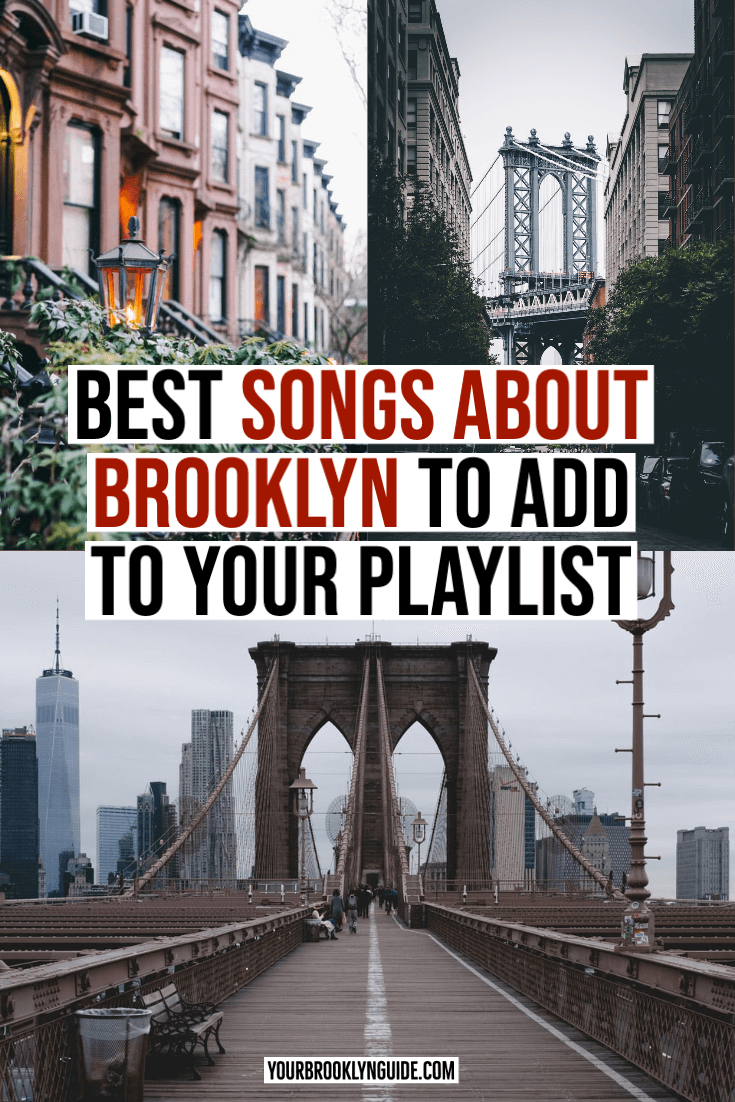